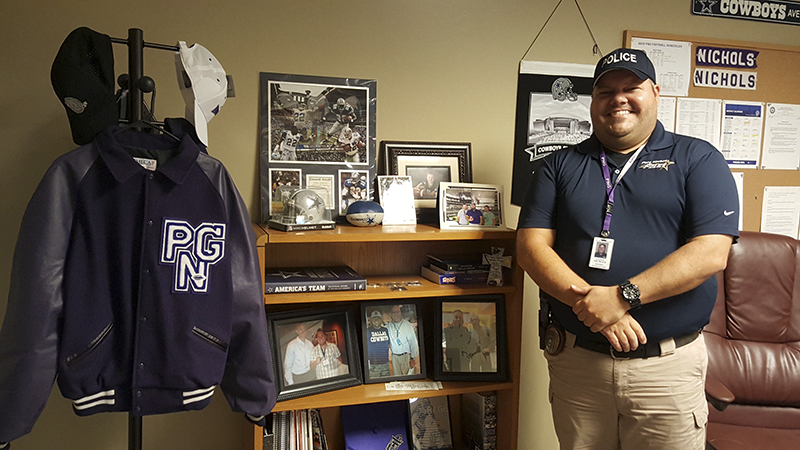 PORT NECHES — Sgt. Clint Nichols’ office near the back of Port Neches-Groves High School is a focal point as students maneuver the hallways of the large campus.

A peek inside the glass shows a coat rack with Nichols’ purple and white letterman jacket from his time as defensive tackle at the school before his graduation in 1998.

There are photos of Nichols with former Dallas Cowboys Chad Hennings, Dallas Cowboys football analyst and scout Bryan Broaddus and even one with musician Charlie Daniels.

The veteran officer is entering his second year as a permanent school resource officer at the high school, where he works hard to connect with students.

“Teachers joke with me that I’m never in here, I’m always walking around so much, talking to the kids,” Nichols said. “I work hand in hand with the assistant principal, who is over the discipline, and I’m there if they need a resource.”

“He is approachable and the kids love interacting with him,” Ryan said. “He has definitely added to the safety and security of not only the high school but also the entire district. We are very thankful to the administration, board of trustees and the City of Port Neches for the partnership that made this happen.”

Nichols has been in law enforcement for 15 years, working for about a year in West Orange, then about two years in Groves and the rest with Port Neches Police Department, where he is still an officer.

The SRO position was created last year with the partnership of the city of Port Neches and the Port Neches-Groves Independent School District. Funding for the SRO will be shared with the city paying 21 percent of the cost while PNGISD will pay the remaining 79 percent.

Training and conferences are vital to keeping up with the industry and safety, and during one event held in Galveston, Nichols met some SROs from Santa Fe school district, Austin Independent School District and Galveston ISD.

“To be in the same room as the officers from Santa Fe, just to sit down and talk with them, it hits home,” he said.

Last May, 10 people were fatally shot and 13 others wounded when a 17-year-old student went on a shooting spree at the Santa Fe school.

Being ready and available

Nichols not only works at the high school campus, he also works with other district campuses. For example, there might be a nighttime event at Groves Elementary, or he may be escorting the Indianettes and band to out-of-town events.

And before school even started Nichols was walking through each one, becoming familiar with the layout and the staff, he said.

A majority of his job is at the high school, and during the off months he’s still available at the police station down the street.

His job makes him a resource to all — and he works hard to connect with students.

“Being in law enforcement on the street and in school is totally different,” he said. “You have to listen a lot more, not that you don’t have to listen on the streets. Kids are not as open unless they know you so I open up and listen, talk to them, hang out with them at lunch.”