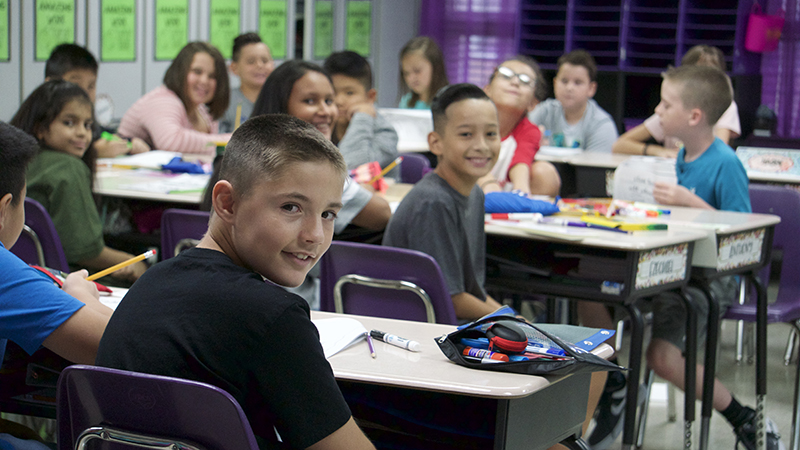 Students at Port Neches Elementary prepare for their first day of class in 2019-20 by unpacking their school supplies. (Cassandra Jenkins/The News)

Peace, love and Indians is this year’s new school motto for the Port Neches-Groves Independent School District, and the principals across several campuses are excited to enact peace and love among their students and continue to spread the Indian spirit.

Kyle Hooper, principal of Port Neches Middle School, said he wants to keep the momentum going from last year’s successful ending and bring in the new school year with the same attitude. 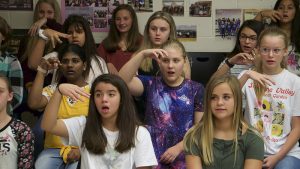 The girls choir sings their scales during the first day of class at Port Neches Middle School on Tuesday. (Cassandra Jenkins/The News) 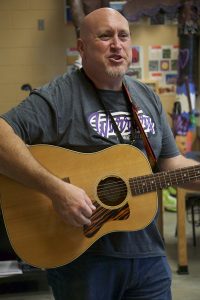 Mark Nesmith, who teaches art and boys choir, will be the instructor for the strings class at Port Neches Middle School. Nesmith shows the class a few chords during class on Tuesday. (Cassandra Jenkins/The News)

“It’s always good to have the kids back,” he said. “We’re excited, it’s going to be a good year. We have the most kids we’ve ever had here. Our enrollment numbers are really high, so we are excited about that. We have a great group of sixth graders coming in, and our seventh and eighth graders are really strong.”

Hooper said he is most excited about the start of the extracurricular programs that are set to begin soon, including a new strings class.

“We have football and volleyball that are always fun at the beginning of the year,” he said. “We are looking at adding TMSCA (Texas, Math and Science Coaches Associations), which goes with our UIL program. It deals with calculators and different math and science fields that students compete in. 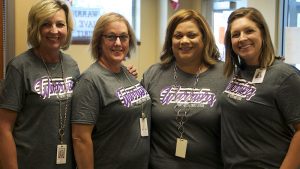 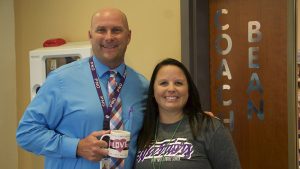 “We also added a strings class, which we are very excited about. It’s a class where kids can actually learn how to play the guitar. We had a lot of students that were excited and signed up for that. We think that is going to be very fun for our students.”

Hooper said he wants to focus on spreading positivity and fun through the students, along with academic success.

Port Neches Elementary principal Kimberly Carter said this year the staff is focusing on rewarding students and teachers who meet their goals.

“New at PNE this year, we are about to post a sign in the hallway that says, ‘When you hear this bell, someone has met his or her goals,’” she said. “We are going to be very goal-oriented this school year for teachers and students, so we are really excited about that.”

Carter said all of her teachers believe that if you have a kid’s heart, you can have their mind. 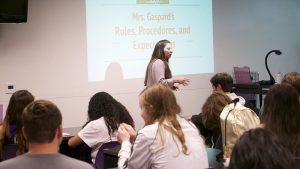 Mrs. Gaspard starts her first day of class Tuesday at Port Neches-Groves High School by reading out the rules and procedures for the upcoming year. (Cassandra Jenkins/The News) 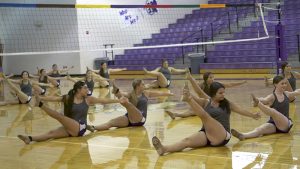 The Indianettes begin the first day of school by stretching in the gym at Port Neches-Groves High School on Tuesday. This year’s squad includes classes from sophomores to seniors. (Cassandra Jenkins/The News)

“We only have our kids here for two years because it’s a fourth and fifth grade campus,” she said. “So, we only have two short years to build relationships and grab their hearts, so we really focus on that for the first six weeks.”

“We’re very excited about getting our Special Olympics program going next year,” he said. “We were able to make it an official P.E. class next year, so we are going to take it further with basketball, football, baseball and track. This is our second year to have American Sign Language so that is expanding. It’s our second year to have a printing and imaging program, as well.

“Our journalism program is going really well, too, with Mike Tobias.” 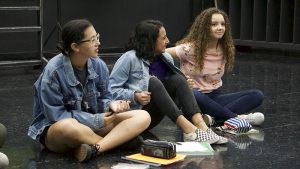 Theatre students at Port Neches-Groves High School prepare for their first day of class by being put in order during roll call on Tuesday. (Cassandra Jenkins/The News)

Ryan said he is excited for the 2019-20 year because every year since he’s been at PNG has gotten better and better.

“I’m looking forward to seeing this year’s seniors step up and lead the campus,” he said. “It’s the beginning of the school year, a fresh start for students and teachers at the greatest school in the universe.”