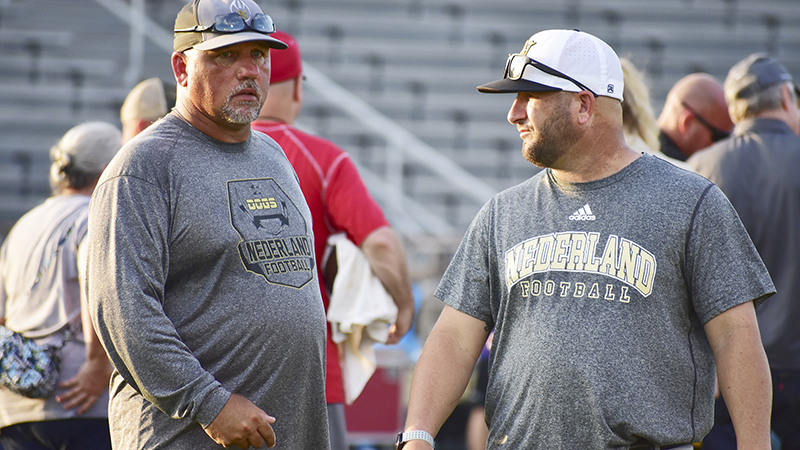 NEDERLAND — Considering that Nederland returned only five starters on defense from its 2018 5A Division II area round team, the unit stayed on senior linebacker Mika Weaver’s mind through the spring.

“I was a little worried about it during the spring, but as soon as we got them pads on, I knew we had a pack of dogs on our defense,” Weaver said. “I got my thoughts together, and I saw how many we have coming back. I started relaxing some. Then they got the pads on, and I really started relaxing.”

Youth has not been an obstacle the Bulldogs needed to overcome this preseason camp. Defensive coordinator Chris Theriot said he’s addressed some “question marks” with a unit that topped District 12-5A Division II teams with 301.3 total yards allowed per game. Vidor was the next closest at 340.1.

“We had a lot of question marks coming into the fall, but as of this point, those guys that are question marks, until they prove us wrong, they’ve done very well,” Theriot said.

Nederland went into camp needing to plug holes at safety, but junior Kerrington Broussard is spending time there and at outside linebacker, where he made 81 tackles and had seven quarterback pressures (one sack) as a sophomore.

“I’m good at covering, but last year, we had Adam [Roccaforte], so I was backup,” Broussard said. “He was faster and could cover better. This year, I’m a better cover, so now they moved me to safety.”

“It’s a lot of pressure, sometimes, it feels like,” Weaver said. “I feel it’s a little more personal this year because last year I did it some, but as a junior, I was looking at my big brothers. Now, I’m the big brother.”

It doesn’t hurt Weaver that the Bulldogs have experience up front with Ricky Johnson, who was one of two freshmen to start on the defensive line last year, current junior Jose Fuentes and senior Jack Laughlin.

Barrow said he was pleased with the Bulldog defense’s effort during Friday’s dual scrimmage with Lumberton and Newton. Next for Nederland is a bigger test Thursday in Port Arthur against former District 22-5A rival Memorial.

As Theriot put it, Nederland will be tested again.

“Last week was a totally different offense, but now with what we’ll be seeing against Port Arthur, [Nederland will] get tested this week, which is great for us,” he said. “We want to see that type of speed and athletic ability because we open up against West Orange [Stark], and we know we’ll see plenty of that.”