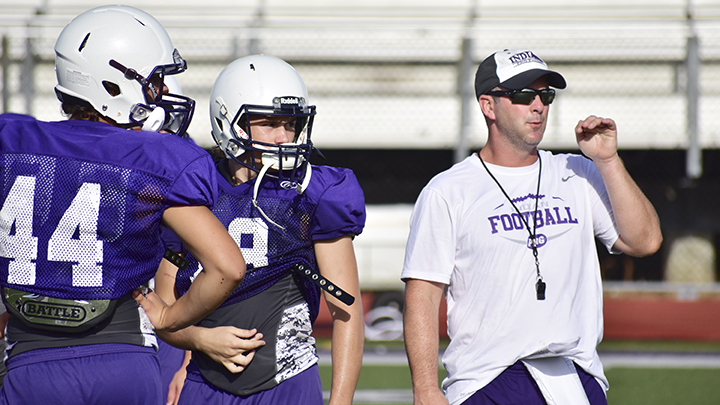 PORT NECHES — In the middle of preseason camp, the defense is usually playing better than the offense, Port Neches-Groves coach Brandon Faircloth believes.

When the Indians scrimmage against 6A Division II state runner-up West Brook at Beaumont ISD Stadium on Thursday — it was originally scheduled for Friday — Faircloth believes his entire team will be better than they were six days earlier.

“Defense is always ahead of the offense. That’s why we scrimmage twice,” Faircloth said. “This Thursday, we hope we can put a better foot forward against West Brook.”

West Brook and West Orange-Stark, PNG’s preseason opponent this past Friday, have combined for five state title game appearances in the past five years, with WOS winning back-to-back championships in 4A Division II in 2015 and 2016. The Indians, who’ve reached the 5A Division II playoffs each of the past three years, wouldn’t have it any easier.

“It really helps us out,” senior defensive end Josh Patteson said. “It shows us the leaders of the defense and it helps the young guys figure out what to do.”

Faircloth thinks West Orange-Stark and West Brook bring schemes that are hard to simulate in practice.

“We go 1s-on-1s, but it’s still different,” he said. “Once you get versus somebody else and get game-speed reps, it benefits everybody, defense, offense, everyone. We’ll be a lot better this Thursday night than we were last Friday night and we’ll be better against Silsbee than we were this Thursday. Every week, we’ll be better, but those first live reps can be tough, especially against a good team like West Orange-Stark.”

West Orange-Stark, playing on its recently installed turf, won Friday’s scrimmage 14-0, but the score may not entirely tell the story of PNG’s defensive effort. The Indians forced the 4A Division II powerhouse Mustangs into a number of turnovers, but the offense struggled to capitalize.

“We learned that we still have a lot of stuff to work on, as far as playing out of position and doing our jobs and things like that,” senior safety/cornerback Ja’Colby Smith-Barber said. “Other than that, we have a great defense here.”

PNG’s 344.2 yards allowed per game ranked third in District 12-5A Division II last season. The Indians are relying on experience at each level of their defense, with Smith-Barber in the backfield, senior Santiago Agudelo at linebacker and Patteson up front leading the way.

The Indians have to make some fixes to their coverage, Templin said, but he added he liked that all 11 players ran to the football.

Not just that, but how the Indians got there.

“I was proud at how everybody ran to the football and they arrived with a bad attitude,” Templin said. “We weren’t perfect.”

Faircloth is looking for the offense to play more to its potential. He mentioned Friday that junior quarterback Blake Bost, who’s taking over for current University of Texas running back Roschon Johnson, played fine.

“I don’t think anybody played up to their potential. The offensive line and pass protection’s got to get better,” Faircloth said. “Communication — we jumped offsides, too many penalties — things like that are going to happen in the first scrimmage.”