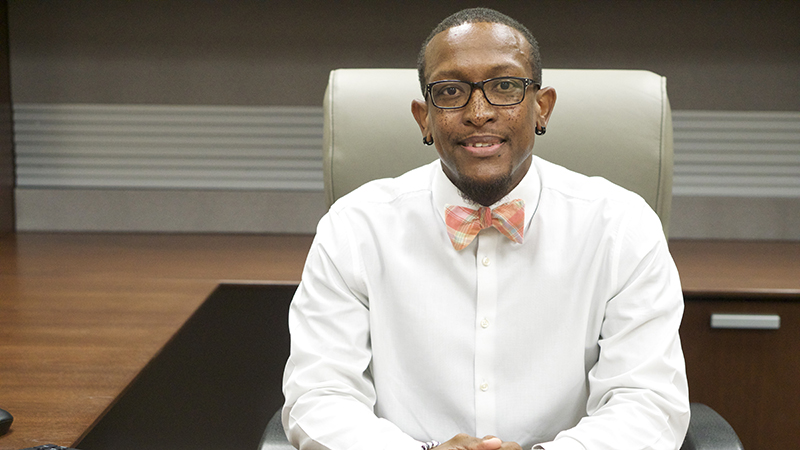 When Brandon Bartie graduated as part of the first class at Memorial High School in 2003, he set out to test his vocals. Singing vocals, that is.

Little did he know that he would be using his voice in a completely different way 16 years later as the youngest school board president for Port Arthur Independent School District.

“I was born and raised in Port Arthur,” he said. “Growing up everyone wanted to be a police officer or a firefighter, but as I got older I started seeing the need to serve, to help people. I wanted to be in a serving capacity. I’ve seen older people help the community out and I wanted to be involved in some type of way.”

After graduating from Memorial, Bartie said he attended Prairie View A&M and studied to be a vocal music major.

“Things didn’t turn out the way I expected it to,” he said. “I came back home and I started working here at the school district. I had my first footsteps in the door by working in the shipping and receiving offices.”

Bartie said he also worked as a coach at Travis Elementary and a hall monitor at various campuses before he was approached by someone who introduced him to the idea of leadership.

“I just call her Coach Rhodes,” he said. “She came down this way probably about 10 years ago. She was coaching girl’s basketball at the time and we had a good connection. Once I started working at the high school as a hall monitor, she said, ‘We need people like you to run for these positions in the city.’ At that point, I wasn’t sure about it. I let fear get in the way and I wasn’t prepared. Three years later I decided to give it a shot.” 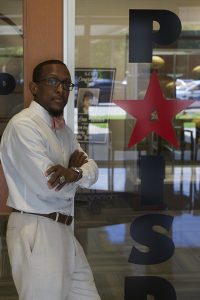 In 2015, Bartie was elected secretary for the board of trustees, becoming the youngest board member to serve in Texas at age 31.

“I started putting my name out there that I was going to run,” he said. “I got full support from the teachers in the Port Arthur school district and community. I told the community, as I told Coach Rhodes back then, when I run I’m going to fight. I’m going to fight for the teachers and for the people that don’t stick out, those that think their jobs aren’t important, from the custodians to the grass-cutting guy. They also have a voice in this community and this district.

“The public education system is more centered on teachers vs. the staff, but everyone is important and deserves a voice. Luckily, the community saw that they needed some type of change and here I am. ”

Bartie served as secretary and vice president before being elected president this year. His first major act carried out alongside PAISD Superintendent Mark Porterie was salary raises, a goal that peaked last week when Port Arthur became the highest paying district in Region 5.

“We see the Houston area and the Barbers Hill area spiking their salary rate up. It’s hard for us to compete, but I did tell teachers that when I ran I would fight for them to a get a raise. I was elected in 2015 and since then they have been getting raises.”

As he continues to meet his goals, Bartie said he looks to the future where his next step includes getting parents involved.

“Every goal that we have set, we have met,” he said. “In the future, I’m really looking for more programs to get our parents involved. That’s a big thing — parent participation. Parents are usually involved from elementary school to middle school and then they start weaning off toward eighth grade. We see that, but we are trying to get the parents to continue to be that backbone and support that they once were. We want that involvement in the future.”

When he isn’t in board meetings, Bartie can be found in a pew or leading the choir where he is an associate minister for Sixth Street Baptist Church.

Bartie said he also loves being around politics — his father is Port Arthur Mayor Thurman Bill Bartie — and spending time with his family.

“I spend most of my time at the courthouse,” he said. “That’s somewhere I plan on being in the future, so I spend a lot of time over there as well. I love hanging out with my family and I have a 1-year-old little boy who I love so much.”

Bartie said as he steps into the new school year his mind is always on his slogan —“Working together as a community, helping our children succeed.”

“I try to keep everybody together and make the best decisions when it comes down to our kids,” he said. “The endgame is the kids. To make sure they get the best quality education there is. I will do whatever it takes for our kids to be on top and to get them what they need to succeed.

“They say it takes a village to raise a kid. As a president, I look to get everyone involved in the community. It takes everybody for us, as a district, and our kids to succeed and give them a quality education.”