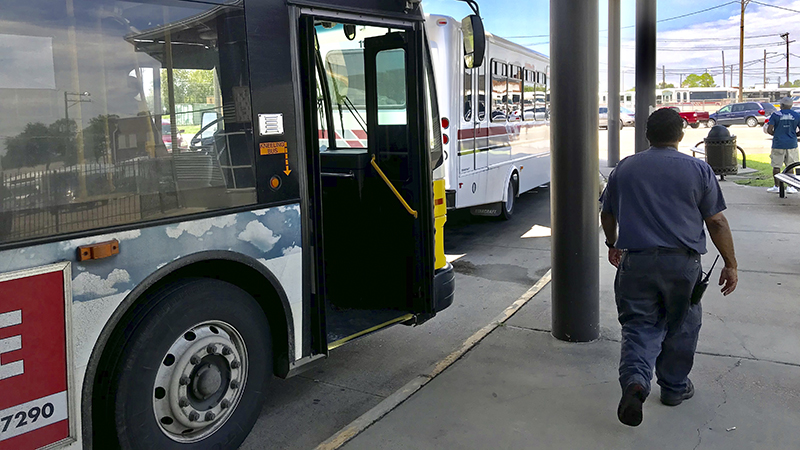 Here’s some irony, residing deep in the heart of an historic oil refinery town: Port Arthur city government will transition to electric buses for public transportation, a bus fleet and community service makeover that may be well underway by late spring and complete by late 2020. So long, fossil fuels.

Two LONO grants totaling $8.5 million will enable the city to purchase 10 electric buses — six by April, four later in the year — to handle the city’s six current routes, leaving some buses available for other duties or in reserve.

The 35-foot buses, which must be ordered and built at a cost in the range of $750,000 to $900,000 each, will accommodate some 40 passengers, about the same capacity as those in the current fleet. If all goes well, he said, the new buses will arrive April 20, customized for this city’s use. 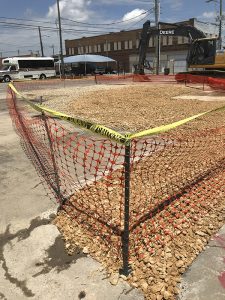 The fuel tank was removed here. A charging station will be built in the area. (Ken Stickney/The News)

Mitchell said Port Arthur has chosen to go to electric-powered buses, which will be cheaper and easier to maintain. Hydrogen-powered buses, he said, are more suitable for larger cities because of infrastructure costs.

He said he expects the federal government will continue to fund electric- and hydrogen-powered buses. But it’s not cheap.

Underground fuel tanks at the transit center have been removed to make way for an electric charging station and work is underway for a new maintenance facility to accommodate the updated fleet, with buses that rest higher with battery packs on the top. Plans for the new facility call for a construction period of five to eight months.

Contracts for the buses will go to the Port Arthur City Council by the end of the fiscal year, Sept. 30.

Mitchell said the department has 12 fixed route vehicles now, some for contingency purposes, and 12 smaller, para-transit vehicles and about eight support vehicles.

“The ones we have now are almost at the end of their useful life,” he said of the route buses. Ten of the city’s buses in its current fleet were “gifted” from surplus buses in New Orleans.

Mitchell said this is not the city’s first innovative attempt to redo its fleet. Previously, the transit department attempted to use propane-powered vehicles, but backed off that for safety reasons.

Mitchell said innovations like electric- and hydrogen-powered buses for public transportation have been led by California, where there is an enthusiastic environmental coalition. He said the environmental benefits with electric buses include the reduction in emissions from buses powered with fossil fuels.

The buses can operate for up to seven or eight hours a day with a single charging, Mitchell said. Some of that depends upon the weather, the habits of the driver, and terrain. 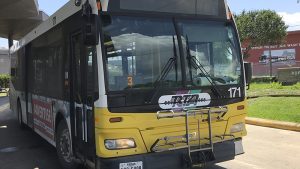 The fuel tank was removed here. A charging station will be built in the area. (Ken Stickney/The News)

Interim City Manager Ron Burton said the audits are comprehensive and demanding, but the Transit Department had its best reviews in more than a decade. Topics reviewed include management, maintenance, procurement and federal initiatives such as Disadvantaged Business Enterprises, Americans with Disabilities Act and Equal Employment Opportunity.

Mitchell said the Transportation Department began its review in June 2018 and his department addressed all findings.

“We’re clear for another three years,” he said.