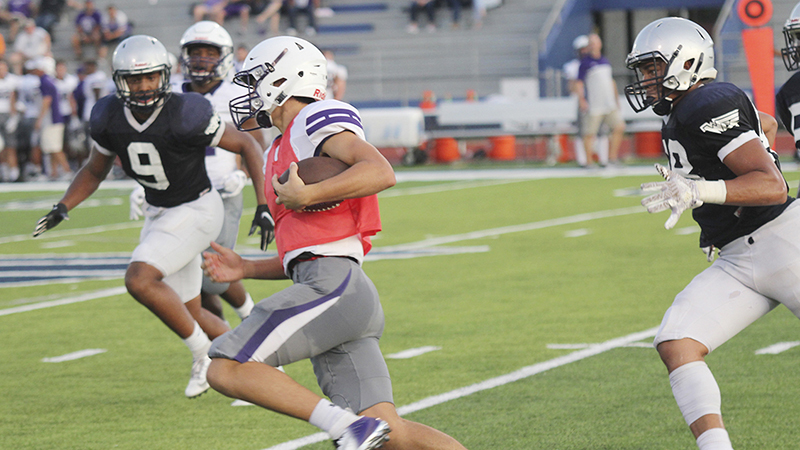 The 2019 Port-Neches Groves Indians’ fresh-faced offensive line faced their first challenge in the form of a 14-0 loss scrimmage against the West Orange-Stark Mustangs.

“They’re a team that’s going to make it tough on you, and we don’t want it to be easy because you may not learn where you get better at. West Orange-Stark will show you need to improve,” Indians head coach Brandon Faircloth said. “We have some penalties and snap count things we have to get better at. I thought our throws were a little off, but we ran the ball pretty well.”

The question seemingly on every PNG fan’s mind was how new starting quarterback Blake Bost would perform after replacing the University of Texas’ Roschon Johnson for the 2019 season. Friday night he struggled against the defensive prowess of the Mustangs.

“I thought Blake did fine, and when you play a team like that, playing quarterback can be difficult, and he’s a great player and will respond in practice and be better next week,” Faircloth said.

The Indians’ untested offense struggled alongside him. They failed to get their first scoring opportunity until the end of the second quarter after a laser-focus pass to wide receiver Peyton Proenza put them within 25 yards of joining the scoreboard.

However, time worked against the Indians as the first half ended before the play could be made, placing them back at square one.

While the traditionally offensive-minded Indians’ struggled throughout the game’s entirety, the defensive line pressured the Mustangs offense with several turnovers to keep the game within reach.

“Our offense put our defense in some pretty adverse situations tonight and I’m proud of them for overcoming the adversity and continuing to play and getting those needed turnovers,” said Faircloth.

In the final half of the game, PNG’s offensive line continued get few scoring opportunities. However, the defense made the game a tank fight until the final quarter with standout defensive back Ja’Colby Smith-Barber, who made a crucial tackle to keep the game within a touchdown.

However, 4 seconds into the final quarter, the Mustangs increased their lead and no other scoring opportunities would be permitted by WOS.

PNG will host its final scrimmage against the West Brook Bruins next Friday at Beaumont ISD Stadium. The Indians’ regular season begins Aug. 30 at Silsbee.

By April Marble, Special to The News