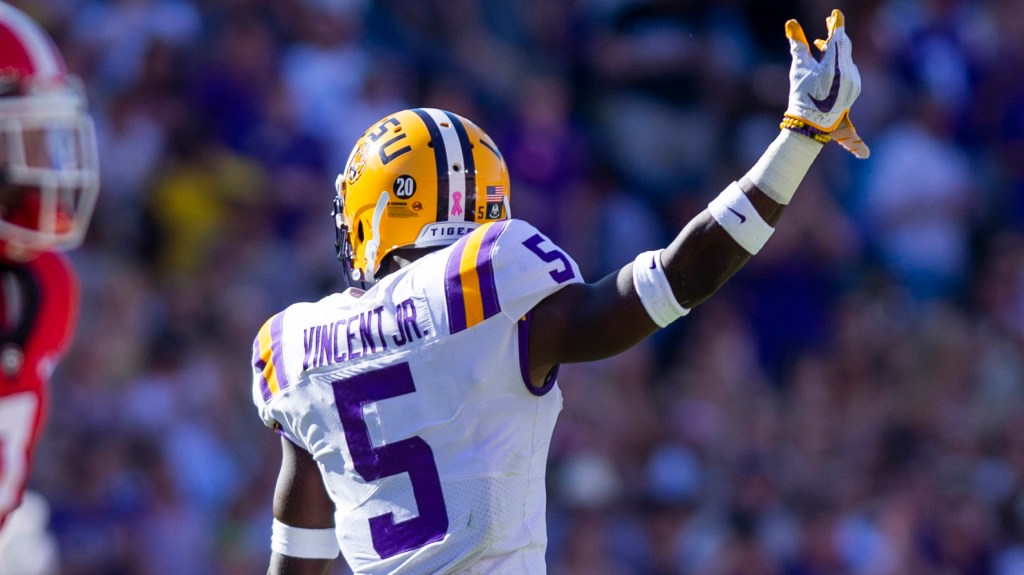 Can you tell I’m excited ? ? pic.twitter.com/zTAwfDSX9h

When LSU unveiled a $28 million renovation to its locker room July 24, photographers captured a wide-eyed, jaw-dropped moment of surprise on the look of the 20-year-old junior from Port Arthur.

The facility had been redeveloped into a room including multiple sleeping pods and was part of an overall revamp of the Football Ops and Performance Nutrition Center, which also features a training room, a players’ lounge named after recent LSU Heisman Trophy finalist and former Houston Texan Tyrann Mathieu and meeting rooms.

Many including Vincent have called the revamp a “game-changer” for a team coming off a win over previously unbeaten Central Florida in the Fiesta Bowl but hoping to do better than a 10-3 record (5-3 in Southeastern Conference).

“It makes it a lot easier,” Vincent said. “Last year, after practice, I’d eat here, go to my car to go home and then come back. Now, I don’t leave facilities until we’re done with evening practice.”

The locker room is designed to help LSU’s players recover from grueling workouts during the long days of preseason camp — in the Tigers’ case, from an approximate 6:45 a.m. wake-up to the end of the last meeting at 9:45 p.m., according to a story on LSUsports.net. The story cited research from The Institute for Scholastic Sport Science and Medicine that athletes who sleep less than 8 hours are almost twice as likely to get hurt than those who sleep more than 8 hours.

“I’m more well-rested up after practice,” Vincent said. “It’s every exciting to go to the locker room and lie down. It’s comfortable.”

Just three years ago, Vincent had just come off the first of two straight UIL 200-meter state championships (one in 6A, the other in 5A) at Memorial High School and went on to be named The News’ defensive player of the year and Willie Ray Smith Award winner as Southeast Texas’ best defender. With an interception in each of his first two seasons at LSU, Vincent has found a consistent role in the secondary as a starting nickelback, a position befitting of his jersey No. 5.

“They needed a nickel spot,” Vincent said. “… I cover. I blitz. I’m in the zone. The NFL is starting to appreciate that position. Nickel defense is 75 percent of the game, and they paid the big bucks. I’m loving it.”

Vincent enjoyed a better statistical season as a sophomore. He finished with 31 tackles (20 solo, including a sack for an 8-yard loss), a big leap from nine tackles as a true freshman.

He still runs a little track, too. On April 27 Vincent ran the second-fastest 100 meters of the NCAA season at the time (10.07 seconds against 2.6-meter-per-second wind). It was his first time running that event since high school. He’s helped LSU win two SEC 4×100-meter championships and the 2019 SEC team title.

Kary Vincent Sr. would be proud. A standout football and track athlete at Thomas Jefferson High and Texas A&M, Vincent Sr. died Dec. 26 after battling complications from pneumonia at age 49. Vincent Sr. was Jr.’s cornerbacks and sprint coach at Memorial.

A football camp in Vincent Sr.’s memory was held in Port Arthur on June 29, and Vincent Jr. was there.

“The willingness to go back and forth to support the camp, there was no question in my mind,” Vincent Jr. said. “To see the people who loved and supported my father, I loved to do it. I can’t wait to do it again next year.”