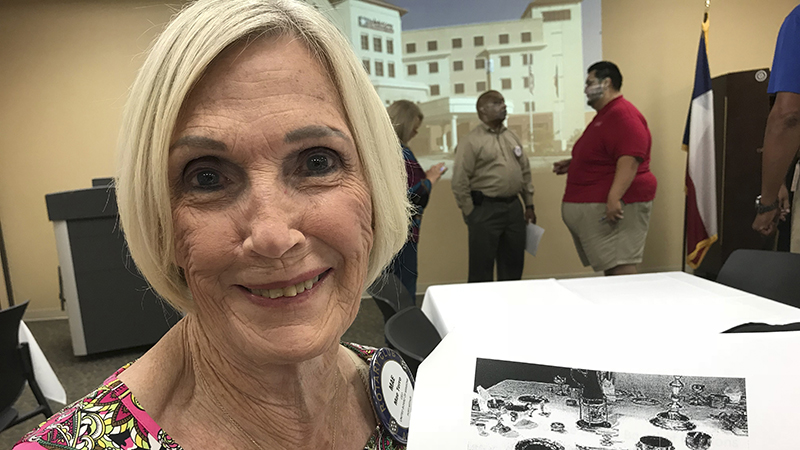 Mae Terro, executive director of United Board of Missions, is promoting a Festival of Tables. (Ken Stickney/The News)

The United Board of Missions, back in its home base in Port Arthur after Hurricane and Tropical Storm Harvey flooding in 2017, is promoting a “Festival of Tables” event to replenish its coffers and help more needy people.

Mae Terro, executive director, said the fundraiser is scheduled for 11:30 a.m. to 2 p.m. Aug. 24 at the Methodist Temple, Highway 73 in Port Arthur. This is the faith-based organization’s first effort at a Festival of Tables, but executive director Mae Terro said she’s attended others hosted by individual churches in Nederland and believes the event promises success.

Here’s how it works: The UBM hopes to recruit 30 volunteers or groups to decorate a table for eight and serve lunch provided by Romero’s in Nederland. Those interested in sponsoring a table — it costs $200 to sponsor and includes tickets for eight seats — should contact The United Board of Missions at 409-962-5746, extension 104.

Terro said the event helps mark a half-century in operation for the UBM. The celebration comes two years late; UBM turned 50 in its present form in 2017, but Hurricane and Tropical Storm Harvey delayed festivities while the group was flooded out of its offices at 6650 Ninth Ave., Port Arthur.

The group includes 25 area churches among its members. It formed with more members in the 1960s when a need was perceived to help impoverished people or those with short-term financial challenges. Eventually, more than 60 churches joined the effort.

Terro said the UBM membership declined since Harvey because some churches closed and others merged. Nonetheless, the need carries on.

From the outset, Terro said, UBM has focused efforts in these areas: Back to School preparations, Share-A-Toy at Christmas and Emergency Services. The last is a catch-all category that includes helping people with food, medicines, clothing and even work-assistance programs.

Terro, 81, has worked for UMB for 22 years, since she retired from a financial institution to a home on Sam Rayburn. Retirement didn’t last long; she told her husband she was moving back to Port Arthur for a new job, which she secured at UBM.

UMB still touches all religious denominations in the area and serves about 2,000 families per year.

“I don’t really have a goal,” she said of the Festival of Tables — just to beef up the budget so the group can do more work. The budget fluctuates because UBM operates on donations and a couple of grants. Two resale stores generate some funds.

She said people continue to struggle — rents are high and so are needs. She said sometimes people stop by the shops and just want to talk.

“We do more than provide emergency services,” she said “We listen.”

Some people come in every day — but that’s OK.

“We don’t know if they want free A/C or not,” she said. “But we like them to visit. If they need help, we can find that out and refer them to the mission.”