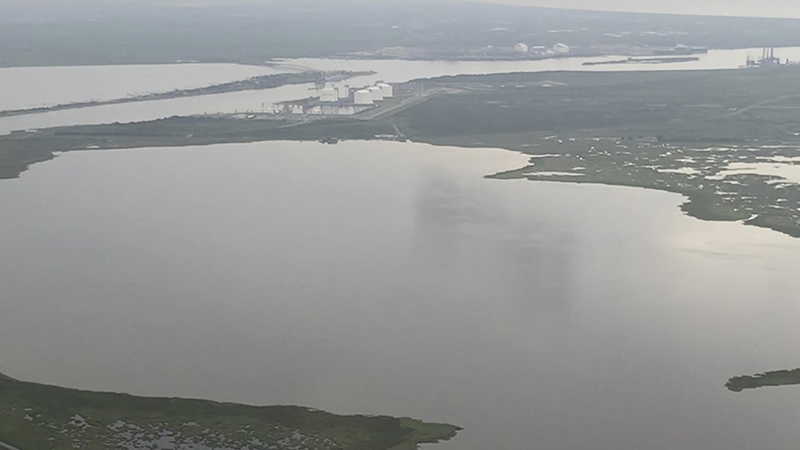 Keith Lake, near the edge of the Sempra property. (Ken Stickney/The News)

Port Arthur LNG officials expected up to 100 visitors Tuesday evening for their open house at the Bob Bowers Civic Center in Port Arthur.

Spokeswoman Kelly Prasser, manager for external affairs for Sempra LNG, said the meeting was for neighbors of the planned Port Arthur LNG site near Sabine Pass to discuss plans to expand the project from two to four trains. Others were expected to attend, including contractors seeking opportunities to work on the plant site.

Sempra, which has for several years discussed siting a liquefied natural gas liquefaction facility in Port Arthur, has not formally said it would build the plant. But it has taken numerous steps toward initiating the project, including signing agreements for selling LNG with Polish Oil & Gas and Saudi Aramco.

As part of the permitting process, the company scheduled a two-hour session Tuesday to meet with neighbors of the project and other stakeholders interested in the process. Neighbors include:

Also expected at the meeting were representatives of the Federal Regulatory Commission, which would approve the expansion.

Prasser said FERC would likely begin its own meetings in the area within the next four to six weeks, perhaps in late September or early October.

Although no final investment decision has been made on Port Arthur LNG, the company has taken significant steps, such as planning to relocate 3.6 miles of Highway 87 between the Intracoastal Waterway and Keith Lake away from the ship channel, where Port Arthur LNG would be located. The new highway stretch would be built to Texas Department of Transportation standards and cost the company some $140 million; the company would donate the highway back to the state at its completion.

The company is also planning to replace and upgrade existing waterlines from Port Arthur to Sabine Pass with a 30-inch line.

In addition, the company has held meetings in Louisiana to discuss a new natural gas pipeline extension there that would run at least to Delhi in northeastern Louisiana.

Bechtel has been selected as the engineering, procurement, construction and commissioning contracting for the initial phase of the project. It will hold supplier fairs in Port Arthur.

Prasser said Sabine Pass itself has been receptive to the project, both for the infrastructure improvements it would bring to the community and for the jobs it would provide.