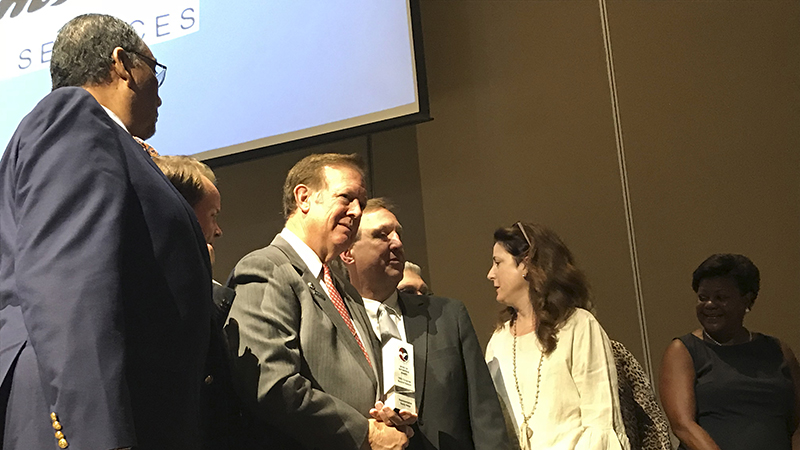 Area lawmakers and the county judge offered a bounty of perceived pluses for south Jefferson County this year before a luncheon that included chambers of commerce from Greater Port Arthur, Nederland, Groves and Port Neches.

Chief among them: Efforts to help this area recover from Hurricane and Tropical Storm Harvey damages and plans and work for our shoreline and ship channel.

County Judge Jeff Branick, who served as emcee and voice for the Jefferson County Commission, touted more work this year that has bolstered the county’s shoreline, protecting it from erosion, as well as ready signs that our environment is rebounding.

Branick said some of the improvements have come from longstanding commitments after storms that date back to Hurricane Rita in 2005 and settlements from the BP oil spill in 2010. That’s enabled the county to plan or build breakwaters and saltwater barriers, protecting the shoreline and marshes from saltwater intrusion, and effected change that has recovered the coastline toward “reestablishing where we were a hundred years ago.”

State Reps. Dade Phelan, R-Beaumont, and Joe Deshotel, D-Beaumont, said the Texas Legislature’s work during 2019 included providing the means for teacher pay raises and putting more emphasis in public schools on mental health assistance in the wake of a school shooting in Santa Fe, Texas in 2018.

He also noted lawmakers were able to take steps toward coordinating regional planning for drainage that is based on cooperation and scientific data — not local politics.

All the lawmakers, including U.S. Rep. Randy Weber, R-Friendswood, said recent agreements with the U.S. Corps of Engineers to deepen the Sabine-Neches Waterway ship channel would position the area to accommodate larger vessels and expand their ports, which already are among the nation’s largest.

Phelan noted that the our waterway became the No. 1 crude exporter in the U.S. in October 2017 and is the No. 1 exporter of liquefied natural gas. New construction, he said, would ensure that port and waterway would hold those rankings for “many years to come.”

Branick said progress at area plants and refineries are helping boost Jefferson County toward the top for expansion among 3,000 counties in the U.S.