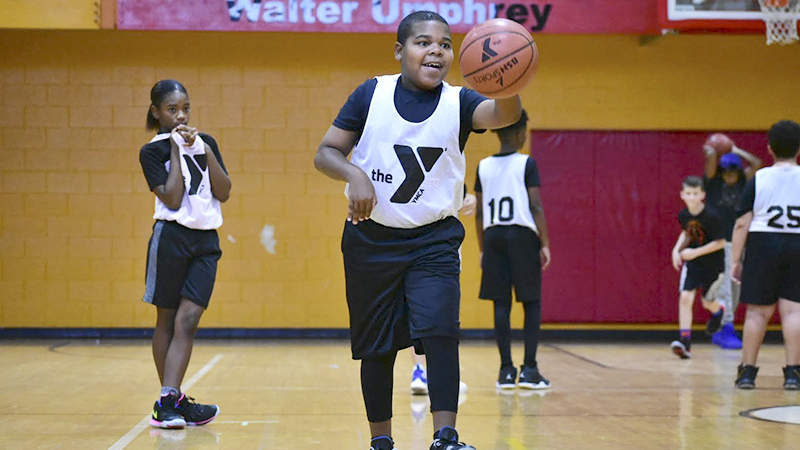 Jaylon Stevenson, 14, takes a dribble toward the basket during warmups for a game Saturday at the YMCA of Southeast Texas. (I.C. Murrell/The News) 8-10-19

When you let a kid play, nothing will get in the way. pic.twitter.com/wf5ZPdc5lY

Excited to play another game of basketball at the YMCA of Southeast Texas, Jaylon forgot to take his bounces toward the basket. Miller also reminded him about his shooting form, instructing him to take his time and focus on the basket once within range.

Jaylon, wearing a constant smile, took the coaching in stride, every shot bouncing closer to falling through the net.

“We don’t treat him no different,” said Jesus Kennerson, the Rockets’ coach. “I get on him about running, getting back on defense, playing defense, shooting and taking good shots. I get on him just like the rest of my babies, but I love him.”

Jaylon and the Rockets were preparing for their final league game of the year against the Lakers on Saturday. Living with SLC13A5 epileptic encephalopathy — the alphanumeric combination is the name of a protein-coding gene — the court is Jaylon’s sanctuary, and the disease has done nothing to keep him away.

“Let me tell you something, he gets on that floor and he has his spot,” said Glenda Trainer, athletic director at the YMCA. “… Jaylon has been with us for a long time. He’s so excited. He knows the rules.” 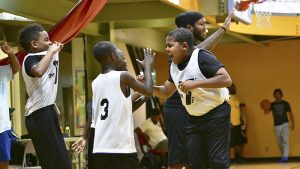 Jaylon Stevenson, 14, celebrates with teammates and coach Jesus Kennerson following the Rockets’ 24-14 victory over the Lakers on Saturday at the YMCA of Southeast Texas. (I.C. Murrell/The News) 8-10-19

The YMCA maintains a policy of letting every registered person play, regardless of disability. Because of this, Jaylon participated in a league of 8- to 10-year-olds that would better suit his skill level.

As important as the inclusion is the sportsmanship others on the court extend to Jaylon. During each game, opponents made a way for Jaylon to try a basket, doing no more than acting as if they’re really applying defensive pressure against him.

Those in attendance, including Penny Daigle, anticipated cheering loudly for him once he made a basket. After all, the pure act of others’ sportsmanship has been endearing to the grandmother of Jaylon’s 10-year-old teammate, Brent Allen.

The National Organization for Rare Disorders describes SLC13A5 (solute carrier family 13 member 5) epileptic encephalopathy as a rare autosomal recessive disorder. Mutations in the gene causes the form of infantile epilepsy and developmental delays with seizures within the first few days after birth, according to the organization’s website. 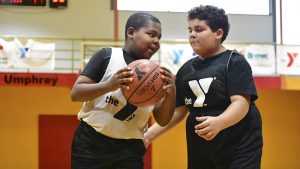 Jaylon Stevenson, 14, goes toward the basket as Hayden Wilkins, 10, applies “token” defensive pressure against him Saturday at the YMCA of Southeast Texas. (I.C. Murrell/The News) 8-10-19

Jaylon begins ninth grade today (Aug. 14) at Memorial High School with a class in life skills and a special education curriculum. His mother, Jovan Stevenson, and Miller say son and grandson is highly intelligent and able to understand what he’s told, although he has difficulties with his speech.

Miller understood Jaylon’s love for sports from an early age.

“As a matter of fact, when he was 2 years old, I used to watch TV and I noticed he would sit down and watch sports. That’s what made me know he loves it. He likes it. He really do.”

Jaylon has participated in a number of sports, but basketball is his “biggest thing,” Jovan said.

Jaylon took three shots in the first half Saturday, none from farther than 15 feet away. He drew iron each time, sometimes with a mad scramble for the rebound ensuing at the urging of the coaches.

Jaylon doesn’t get into the scramble. He gets into position at the top of the full-court press, heeding every lesson he’s learned in practice.

Later in the third quarter, a teammate handed him the ball at midcourt. Jaylon drove from outside the right wing, using his right hand to support his left-handed dribble at times, and took eight steps toward the basket for an overhead shot that bounced off the rim and in.

No defensive traps. No traveling call. All applauses. Jaylon finished 1 for 5 in the Rockets’ 24-14 win. 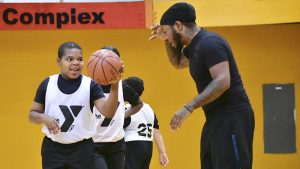 Jaylon Stevenson takes instruction from his coach, Jesus Kennerson, during warmups for a game Saturday at the YMCA of Southeast Texas. (I.C. Murrell/The News) 8-10-19

A corrections officer, Jovan usually doesn’t get off work in time to see Jaylon play, but she heard the good news from her father.

“I love to see him do his thing when he do it,” she said.

For many kids, regardless of disability, making a basket in a game is a big deal. The other nine players on the floor know what Kennerson knows and let Jaylon shine.

“The first game, he was 3 for 5, and then his second three games, he was 0 for 4,” Miller said. “I’m so grateful for the people. The people love him and what he’s doing, trying to do. When he does score a basket, the people reward him by applauding and making him feel so good.”

Every time Jaylon scores, it leaves Kennerson plenty for which to be thankful.

“I just want to thank the YMCA and this organization, especially Ms. G [Trainer] and Coach Lefty [Terrell Hines] for turning the team over to me, and like they said, getting him in and letting him be proactive as much as possible,” he said. “I commend all the coaches also that work with us by allowing him to even get in and have an opportunity to score and be among the children.”

Jaylon’s disorder has not stopped him from dreaming big about his basketball future. He’s even refereed games involving much younger players — whistle, striped shirt and all. 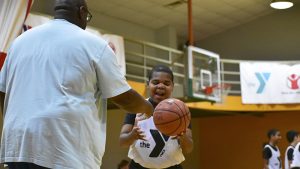 Karl Miller works with his grandson Jaylon Stevenson, 14, on his shooting before a game Saturday at the YMCA of Southeast Texas. (I.C. Murrell/The News) 8-10-19

“He tells me he wants to grow up to be a coach,” Miller said. “He wants to do some coaching. I told him, with his disability, they might let him do it. But from a game-playing [standpoint], he loves to play, and he’s really intelligent.”