The Houston Dynamo do not find themselves in a good place when it comes to MLS standings, but Davy Arnaud finds himself “honored” he’ll lead the team’s charges for the final nine games of the season. 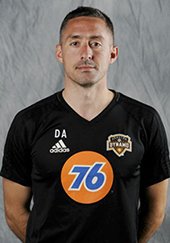 “This is just kind of a testament to his career, as a soccer player and coach, and his great work ethic and knowledge of the game that he progressed to this level of coaching,” said Keith Barrow, Nederland High School’s boys soccer head coach and the Beaumont boys director for the Dynamo-Dash youth club.

Twenty years since leading Nederland High School to its only state championship match in boys soccer, the 1999 graduate spoke about being elevated to interim head coach Wednesday at a news conference, one day after the Dynamo announced Wilmer Cabrera had been fired.

And he made sure to give his hometown some love.

“I’m honored that the club is giving me the chance to take charge now for the next nine games,” Arnaud said. “Being close to my hometown is nice — I’m about an hour and a half down the road. I’m happy to get the chance and excited about what these nine games will bring.”

Houston (9-13-3) — which started the season 7-2-2 — hosts the Colorado Rapids at 8 p.m. Saturday at BBVA Stadium. The Dynamo are six points behind FC Dallas for the seventh and final playoff position.

“We’re not far,” Arnaud said. “I think the main objective and our priority is this Saturday, [with] the playoffs obviously being the ultimate goal in this nine-game road that we’re on. The focus and priority for the staff and the players is what I said today, it’s Saturday. That’s the main focus. To prepare for that, we need to win every single day. The small goal for us is to go out to be great in training tomorrow and prepare well the next day, with the ideal thing being to get a positive result on Saturday against Colorado. If we can continue to do that daily, we can ultimately be back in a playoff spot.”

Houston has lost four straight MLS matches and five overall, counting a 6-5 shootout defeat to Club América in the Leagues Cup quarterfinal after a 1-1 tie on July 24. That loss started the drought.

“I think we as a club have been in a challenging moment in the last couple of months,” Dynamo general manager Matt Jordan said. “The last few weeks have been very challenging for us. We hope that the team would work its way out of it.”

The Dynamo are turning to a 39-year-old who, with his playing background that includes a stint on the U.S. national team, could better relate to the current players. Yet, Arnaud, who joined Cabrera’s staff as an assistant before the Dynamo’s 2017 Western Conference finalist season, said implementing his coaching style might be tough at this point in the calendar. Arnaud has been a coach since retiring from MLS following the 2015 season, starting with one season on the D.C. United staff.

“It might be tough because we’re not in the situation where we have six weeks of preseason to completely change everything that we’re doing and implement a different style,” Arnaud said. “For me, I think it’s more about solidifying some of the things that we do. Making some tweaks to get better as opposed to completely changing what we do. At the end of the day, we have a good group of players who had success earlier in the year. The last two months now have been troubling. We’re going to try to get back pointed in the right direction and make some small adjustments along the way.”

Barrow said he and Arnaud don’t get to talk much because of Arnaud’s schedule, but Arnaud has an open-door policy and interacts with the kids who go with Barrow to see the Dynamo.

“It’s always great to see someone from Nederland make it in the league and the way he interacts with kids,” he said.