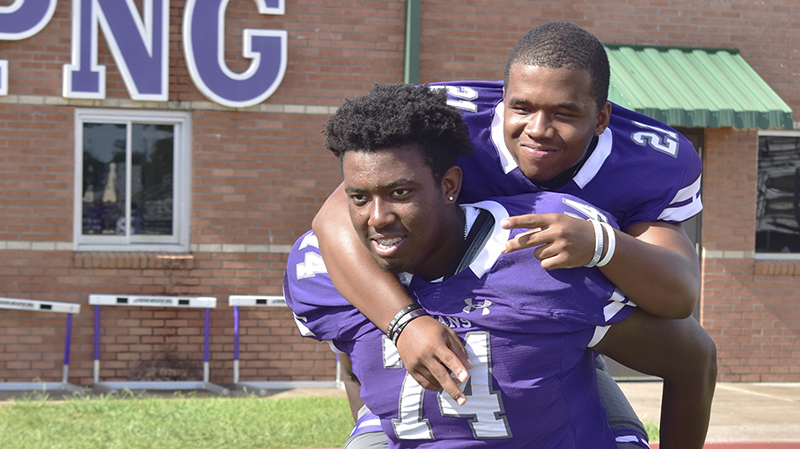 PORT NECHES — Even with a four-star rating and top-10 national ranking among offensive tackles in high school, Jaylen Garth’s best football is still ahead of him.

“He is special, but he’ll be the first to tell you he has a long way to go as far as developing his overall game,” Medlock said. “He’s a very raw player at times, but he continually works at his craft. Jaylen’s best football is still way out in front of him.

“A lot of people recognize you as one of the best in the state. He’ll openly tell you, ‘I have to improve at this or that.’ We have pretty candid conversations about it every day.”

The continued desire to improve his game has helped Garth earn the No. 6 ranking at his position, No. 11 ranking among all Texas prep players and No. 53 mark overall in the U.S., all by 247sports.com. Oh, and he’s also verbally committed to the University of Texas, where he expects to reunite with a quarterback he protected the past two seasons.

Not even offers from the likes of Alabama, LSU and Texas A&M could change Garth’s mind.

At 6-feet-5 and 285 pounds, Garth is a noticeable presence on Medlock’s stalwart offensive line, but he lets his play catch the attention of fans and recruits alike.

“I just knew I had to really focus on the technique stuff and not so much rely on my size,” Garth said. “Just get down to the fundamental things that I could focus in my technique.”

Before Garth could turn his attention to the 2019 season, he had one more obstacle to overcome. He needed almost the entire spring to fully rehabilitate from a torn meniscus he suffered last Oct. 19 in a game at Dayton.

“He had an unbelievable rehab he had to do,” Medlock said. “He had to push and really grind to be back by spring time. It was a difficult injury, even know it wasn’t the most catastrophic injury.

“He struggled with the idea of not being able to play and all the emotion that goes on with that.”

Then-freshman Dalton Dickerson stepped up and continued to protect Johnson while helping PNG win the No. 1 seed from District 12-5A Division II and advance to Region III semifinals for the third year in a row. Now, Dickerson is working out alongside Garth as right guard.

The rehab, along with his work ethic and athletic gifts, Medlock cites, have helped Garth rebound nicely. With no brace on his knee, one may struggle to believe Garth was ever injured upon seeing him pose with junior running back Lance Vaughn on his back — or senior RB Zane Hernandez carrying Garth behind him, for that matter — during Tuesday’s well-attended team media day.

“He fell in love with the weight room,” PNG head coach Brandon Faircloth said. “When I come in during the mornings, Jaylen is still lifting weights. He looks bigger. He looks stronger. He’s poised for a great year. Great leader on our offensive line. Great example of the kind of high school football player and high school student you want to be.”

With junior Blake Bost under center and a deeper corps of running backs, a healthier Garth has picked up new schemes to help continue to protect and make a way for one of Southeast Texas’ most explosive offenses.

“We’ve changed a lot of stuff since Roschon left, because we’ve got really talented backs this year,” Garth said. “They’re going to make us look good this year.”

So will PNG’s own defense, in a way.

“They always make me humble myself,” Garth said. “They always give me a good look. They make me better every day, and we do the same for them.”