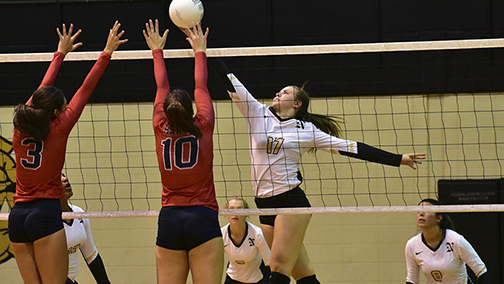 NEDERLAND — Starting the season 2-6 in a Pearland tournament did not concern Nederland volleyball coach Allie Crommett very much.

“We really like to schedule a tough preseason because I like, just like in this match, for my team to overcome adversity early in the season so we can make adjustments for when we get to district,” Crommett said Tuesday following a three-set win over Hardin-Jefferson. “I feel like we’re making those adjustments a lot earlier than we did last season, and I feel like we’re settling into a tempo a lot earlier than we have in the past.”

Karley McGill scored the last two points to finish off the victory. She had nine kills.

“I just knew I had to work for my team really hard because, I mean, that’s what we needed,” McGill said.

For Nederland (3-6), Jenna Brekel finished with 21 digs, while Kamren Savarino totaled 26 assists and Sydney Nelson made 11. Hannah Hickey and Katie Perez each had eight kills.

Nederland was up 17-10 in the third set before H-J tied it at 18-all and eventually took a 24-23 lead. A big hit from the Bulldogs’ left side tied the match.

“I could tell we were all down at first, so I knew if I got one kill, we’d be hyped again,” McGill said.

At Sabine Pass, Jamesia Jones’ eight digs helped the Sharks (4-3) dominate most of their four-set match with Chester.

Sabine Pass coach Andie Myers felt her team came back “10 times stronger” after the third set got away, as she described, with serve-receive issues.

PNG will begin play Thursday in the Dickinson tournament.