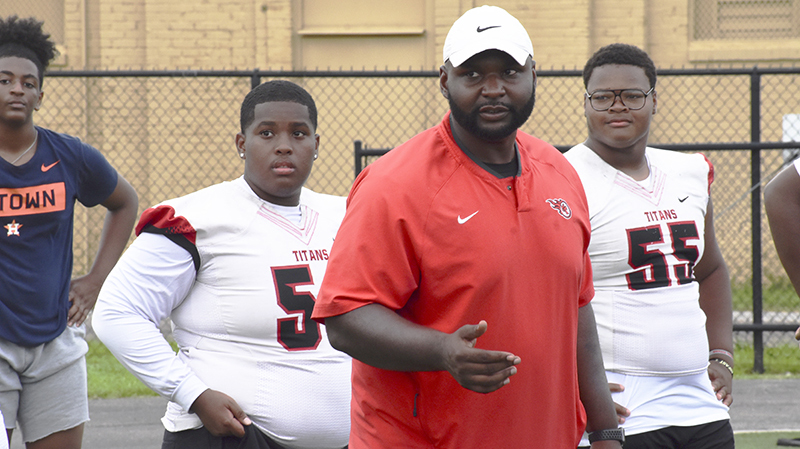 That doesn’t team the Memorial Titans are behind in any way.

“For that extra week that the other guys get, we get 18 spring practices and all summer, so I would be willing to say that we’re further ahead than those teams that get an extra week of fall camp,” second-year head coach Brian Morgan said.

Morgan has maintained Memorial’s tradition of holding full practices during the spring. As a result under UIL policy, Aug. 12 is the earliest date this year the Titans can begin preseason camp.

Morgan’s first spring camp in 2018, shortly after he was elevated to head coach, was used to implement his own system. That helped the Titans post a 9-2 record.

This past spring, Morgan said being able to practice fully in the spring gave him and his coaching staff “a better sense” of his team’s capabilities going into summer workouts, which included sports-specific drills for the first time under UIL policy.

“You’ve got to see a few guys tackle and some guys that have good springs and we’ll see them have a good fall camp, but all-in-all, I think we know who our two-deep are on both sides of the ball,” Morgan said, although he declined to release his depth chart until the Aug. 30 opener at Deer Park. “I don’t think there are any holes. We’re not scrambling around or searching for any transfer in. I think we have a good situation with the crew we’ve got.”

Morgan brought in former University of Utah right guard Robert Conley to coach the offensive line. Conley succeeds Zach Bass, the former offensive coordinator who worked with the line and is now head coach at Tarkington.

Conley went to high school with Titans defensive coordinator Korey Mangum at La Marque and played on the undefeated 2008 Utah team that stunned Alabama in the Sugar Bowl. (Utah went 12-0 under Urban Meyer during Conley’s 2004 redshirt year.) Applewhite, a former Texas quarterback, is now an analyst at Alabama.

“We were fortunate enough to win a state championship at La Marque my senior year [2003 season], and our mothers know each other as well,” Conley said. “It wasn’t much of a selling point because I heard of the long line of history of Port Arthur. La Marque being an hour, 45 minutes south of here, it’s a ton of athleticism, and I know you get the right coaching staff like we have here, the sky’s the limit. I knew of Port Arthur, obviously.”

Conley is an important piece of the Titans’ offensive scheme under new coordinator Rashard Colquitt, who still works with receivers.

“We haven’t changed anything what we do,” Morgan said of the offense. “We have to cater a little bit every year to some things to the personnel you have. That’s just part of high school football. You get to go out and recruit certain positions so you’re better at one position than last year. You’ve got to cater a little bit to that. The offense may change because we may run it more, throw it more or whatever it may be. We’re going to do what we do, and we’ve got a good grasp of it. I think we’ve enjoyed being in the system a year. They’re going to be fine.”

That’s how Morgan feels overall about the Titans going into camp.