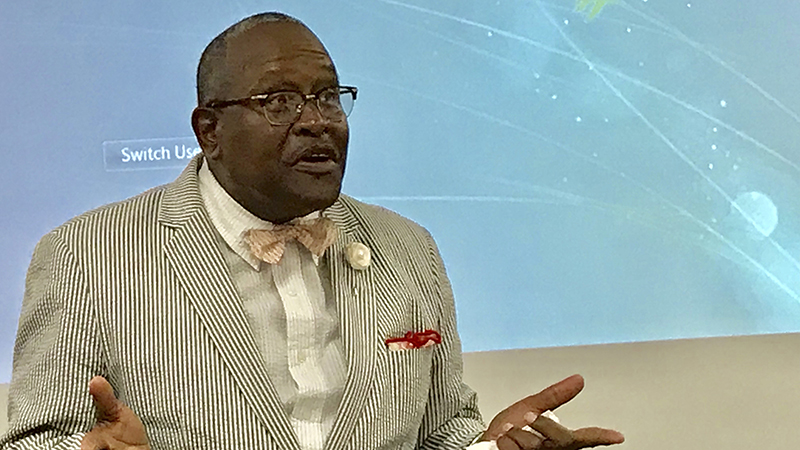 If Thurman Bill Bartie enjoyed a “honeymoon” as Port Arthur’s new mayor, he said it ended this week.

“I was mayor for 30-something days,” he told the Rotarians at their Thursday meeting, before the lingering issue of choosing a new city manager came to a vote Monday. The City Council opted to hire a professional firm to search for candidates, instead of hiring the city’s former public works director Hani Tohme.

Tohme fell just short of winning the job in March; the issue has continued to be a sore spot among people in the city, including some of Bartie’s supporters.

Otherwise, Bartie recounted for the Rotarians his own happy childhood in West Port Arthur, which he referred to as a “village.” There, he suggested, people grappled with issues like racial bias — Bartie was born two months after the Supreme Court’s Brown vs. Board of Topeka decision was told — but he said he and other neighborhood children were nurtured and guided.

“In the West Side of Port Arthur, the entire village took care of you,” he said. “They raised me. They made sure you were going to do the right thing.”

While he said life was different then for blacks and whites in this city, he did not suffer for it. He was delivered in birth by a midwife, he said, in part because of limited hospital accommodations then for black Port Arthur people. But the midwife never lost patients, he added: “She slapped you once and handed you to your mother and God took care of you.”

Bartie, who is a Baptist preacher, took special care to note he prospered in faith under the guidance of the Rev. Ransom Howard, that he was a firm believer in corporal punishment — as a justice of the peace, such views sometimes helped land him in political trouble — and that he has learned from mistakes in his political past.

But he took pains to note that America — and Port Arthur — has changed since he was born. The same youngster who had to go to the back door of the home where his mother was a maid has became mayor of the city, he said, “and that’s a blessing from God.”

Because of people who cared about him in the “village,” he said, he avoided the pitfalls of others, including friends, who spent time in prison.

“I missed the prisons,” he said, while they did not. Instead, they “detoured from the village.”

Bartie noted all people in Port Arthur must share in the economic boom that the city will experience as billions are invested here. To do so, he suggested they bury hard feelings from the past.

He noted local people ought to pursue two-year education programs that are preparing employees for the local plants.

“Financially, you can’t beat where you are,” he said.

In response to a question, he suggested a route to making sure Port Arthur gets a full count of its citizens in the 2020 Census, as they city seeks to qualify for maximum federal funding: