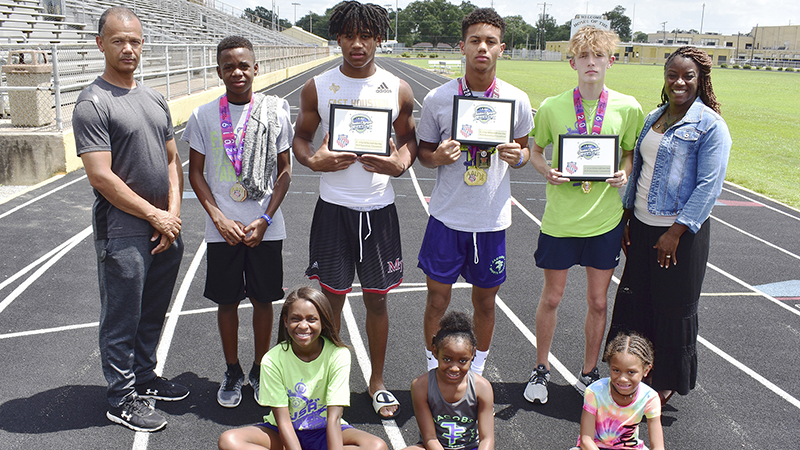 “We had it planned out from like the beginning of the year to run with the Texas Storm to try to win 4-by-4 [4×400-meter relay],” the 15-year-old Port Arthur resident said, mentioning a Houston-area club.

Jacobs helped the Storm win the event at the USA Track and Field Junior Olympics. That was on July 28 in Sacramento, California.

Four days later, Jacobs was in Greensboro, North Carolina, with his teammates at the Jacobs Sports Academy, run by his father and mother, Cyrus Sr. and Shekerah. That day, he helped the 15- to 16-year-old 4×800 team win gold in the AAU Junior Olympics.

The next day, Cyrus Jr. ran on the winning 4×100 and 4×400 teams in the same meet. The 4×100 team nearly broke a 3-year-old AAU national record, but Cyrus Jr. had to recover from a slip on his takeoff on the final leg to beat Greater Houston Track Club by 0.04 second.

Two coasts, four gold medals, all of them back on the Third Coast.

“It was a long flight, tiring, but it was all worth it,” Cyrus Jr. said. “We ended up winning in both.”

The Jacobs Sports Academy is a track club that practices at Nederland ISD’s Bulldog Stadium and Lamar University’s Ty Terrell Track. The club hauled in a fourth gold medal from Greensboro, as Houston-area athlete Connor Washington won the 100 meters and came in second in the 200.

Winning nationals is nothing new for Jacobs Sr.’s club, originally known as Golden Triangle Track Club. The 4×800 team won gold for the third year in a row.

Jacobs Sr and his wife, both Lincoln High School graduates, were high school track athletes. Shekerah Jacobs was a state champion in the 400 meters in 1995.

They also have a daughter, Celena, who competed in the 8-under 200 and 400 events in Greensboro.

The Jacobs’ club attracts athletes locally and from outside the Golden Triangle. Alex Chambliss of Cypress helped the 4×800 team win in Greensboro and knew Cyrus Jr. when the latter was attending Cypress Ridge High School.

“It was only my second year running track, so I didn’t know that much about it,” said the Bridgeland High School sophomore. “Going into this year, we knew from the beginning in January we were going to have a strong 4-by-8 come nationals. It was the first time we all got to run together, so it was really exciting, like seeing all of us succeed.”

Where Cyrus Jr. will attend school in this area has not yet been determined.

Jaylon Guilbeau, a sophomore football and track standout at Memorial High School, helped the 4×400 and 4×800 teams qualify for the AAU Junior Olympics during a regional meet in the Houston area. His sister Jada was a regional qualifier in the 100 meters and 4×400 relay in the 9-10 age division. 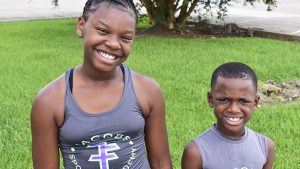 Tevijon Williams of Houston placed fourth for Jacobs Sports Academy in the 100. And Beaumont siblings Kelis and Quinn Dayse qualified for regional running events from the 100 to 800.