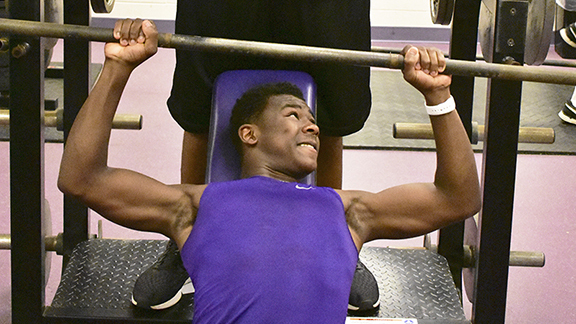 In 2015, the Sharks were finished 0-10 in the midst of an 18-game losing streak that lasted until the second game of 2016. That year, in Jason Thibodeaux’s first season of his second stint as head coach, the Sharks earned their first playoff berth since 2011 and first winning season since 1983.

The effects of Tropical Storm Harvey in 2017 washed out almost half the Sharks’ season and they struggled with numbers in a 1-4 campaign. Last season, low turnout remained a problem, and the Sharks were down to 12 players after their second game, causing school officials to cancel the rest of the season at 0-2.

The Sharks have 21 players so far on their roster. As many as 17 participated in 2018’s preseason camp, but only nine showed up during one practice.

“I think the kids saw how we struggled and how we didn’t finish the season, so we had kids who decided by the end of school they wanted to play, and we get that every year, but when August rolls around, we don’t get those kids that say they want to come out.”

Five of the 13 eighth-graders from the 2018 Sabine Pass middle school team are competing as freshmen, Thibodeaux said. Seven seniors from last season graduated.

“Everybody had seen that they want to improve,” James said. “They had seen what we did last year, and it wasn’t that good. I think everybody just wanted to help the school out and wanted to play.”

Junior running back/linebacker Grayson Johnson relied on the leadership of a senior last year to persevere through the program’s challenges.

“What really helped me last year was Logan Odom,” Johnson said, crediting the offensive lineman and linebacker. “He really picked me up last year as a player and he really developed me into what he was.”

Last season’s cancelation caught the attention of the Houston Texans, who invited the seniors from that team to their facilities and made them guests of a 20-13 win over the Buffalo Bills on Oct. 14. It was a happy ending to an otherwise sad story of a lost season.

Participation issues in recent years stemmed partly from the lack of winning tradition at Sabine Pass and the displacement of athletes shortly after Harvey. Many of the athletes live outside Sabine Pass ISD, which is an open-enrollment district meaning students living outside its borders can register to attend there, and some are faced with working jobs and not coming back to campus until the start of classes.

To address development, Sabine Pass decided to pull out of competing in District 12-2A Division II for this season and is playing a schedule made up of small UIL and Texas Association of Private and Parochial Schools teams, which means the Sharks cannot qualify for postseason play.

The UIL did not penalize Sabine Pass for ending its season early, and the school did not have the option of dropping down to 1A, a classification for six-man football only.

“It was tough because it’s a second-year alignment [in the UIL],” Thibodeaux said. “Most of these schools already had their schedules set and their pre-district games and they’re home-and-home. … Now, we’ve got to travel a bit. A lot of schools are in Houston. But we were going to have a football season.”

James isn’t concerned with not being able to go back to the playoffs. His approach is as if the Sharks could win a championship ring.

“It’s not like every other season,” James said. “We’re going to make it like, everybody says they want to go state-bound. We’re going to try to make it and work hard, put the dedication in, and everybody tap each other on the back and go harder and push.”