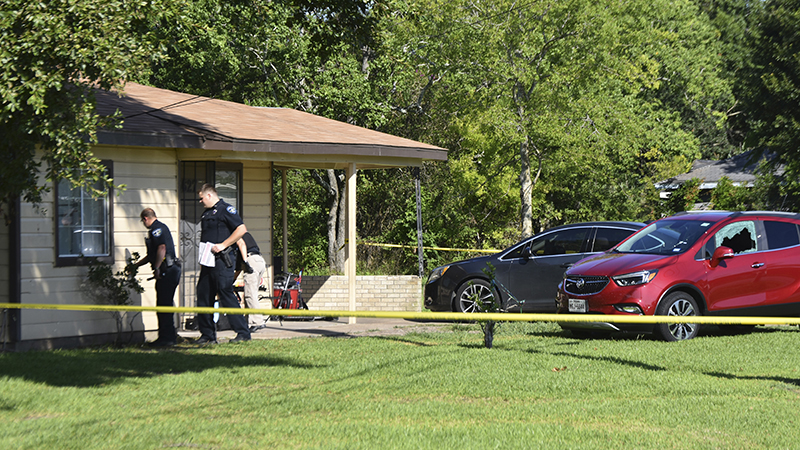 An early morning July 24 drive-by shooting in the 5600 block of Grant Avenue left a 4-year-old boy with a gunshot wound to the back. The home and vehicles were sprayed with bullets. (Mary Meaux/The News)

But a stalemate has arisen in the case.

“The person we believe was the target is not cooperating,” Port Arthur Police Det. Lakiesha Thomas said.

Thomas said community members need to understand that when violence such as this happens and when the possible victim does not want to cooperate with the police investigation, it makes it difficult for police to investigate.

Detectives said they are doing what they can with limited information.

“We know this is going to be a gang-related incident,” she said. “And the person we feel is the target is not being cooperative. What can we do?”

The public may be able to help by giving tips to police about the shooting.

The normally quiet El Vista area neighborhood was awakened by gunfire July 24 in a drive-by shooting that left the child shot in the back.

The pre-schooler was asleep in a front room of the home in the 5600 block of Grant Avenue when more than a dozen bullets struck the house around 6:21 a.m. The wood-framed home was full — seven people were inside, including visiting family members.

The child was the only one injured in the shooting.

Police said the shooting appeared to have been targeted at the house but did not say why this particular house was targeted or who was the possible target.

Those with information on the shooting are asked to call the Port Arthur Police Department at 409-983-8600.