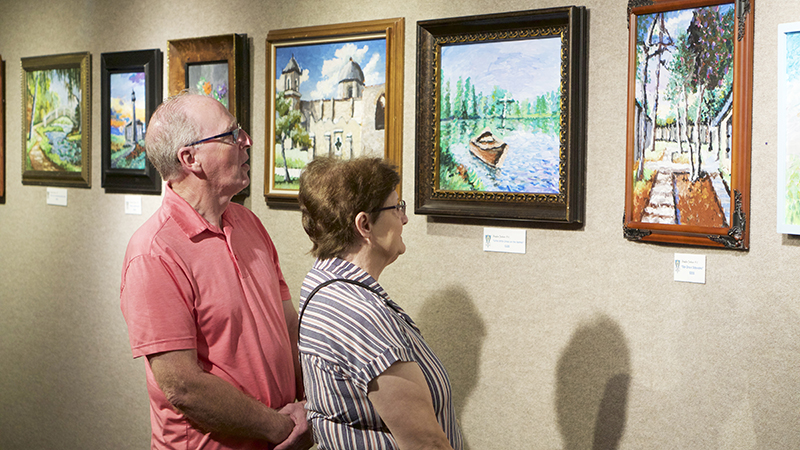 Douglas Jackson’s exhibit ‘An Impressionable 55 Years’, is on display in the Museum of the Gulf Coast until Oct. 26. Art pieces are available for viewing and purchase.

Douglas Jackson is a well-known artist in the Southeast Texas region and many know his name, face and story.

Jackson, of Groves, was born with cerebral palsy and was unable to use his hands or legs, but that didn’t stop him from becoming what he always wanted to be — an artist. Today his work can be found hanging in homes, businesses and museums.

“An Impressionable 55 Years,” celebrating Jackson’s career through art, opened with a reception at the Museum of the Gulf Coast on Saturday. It closes Oct. 26.

Michael Underhill, archivist at the Museum of the Gulf Coast and curator of the show, said it was an honor to have Jackson’s art displayed in the museum. 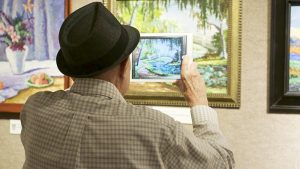 “Douglas Jackson has overcome a great many obstacles,” he said, “many of which would be something that most folks couldn’t get over. I, with all my functioning faculties, couldn’t paint the things he does or do the things he does.

“He really is an inspiration to people. It’s just another case of a local person who didn’t let where he was from and what was stacked against him from doing what he wanted to do. He really is a special person and he belongs in this museum.” 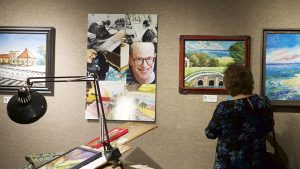 Underhill said putting together the exhibition was one of his first projects as curator.

“My first step was going to meet with him and speaking with him to go over what all he was interested in putting on display,” he said. “When we decided it was going to be an art show and an art sale, he was gracious and eager to show us all the matter of paintings he wanted to put on board.” 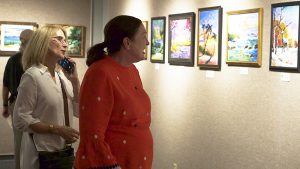 The exhibition displays the artwork in a simple style with the paintings lined up on the walls with single individual lights shining on each frame. Underhill said they wanted to truly show Doug Jackson’s range of style.

“As far as process goes, we brought him over from where he was staying in Oak Groves and had everything collected and catalogued,” he said. “Then we started the process of determining in what manner we wanted to have them on display. What we wanted to do, what we tried to do, was to put them up in a way that made full use of his range.

“We tried to have a mixture of all the different types of paintings he does — landscapes, buildings, animals and those kinds of things. We really wanted to display his range as an artist.”

Underhill said he encourages the community to come and take a look at the exhibit and buy some art.

Douglas Jackson’s paintings will be on display Aug. 3 – Oct. 26 at the Museum of the Gulf Coast located at 700 Procter St. in Port Arthur.

To see his art or buy a painting visit https://www.museumofthegulfcoast.org.