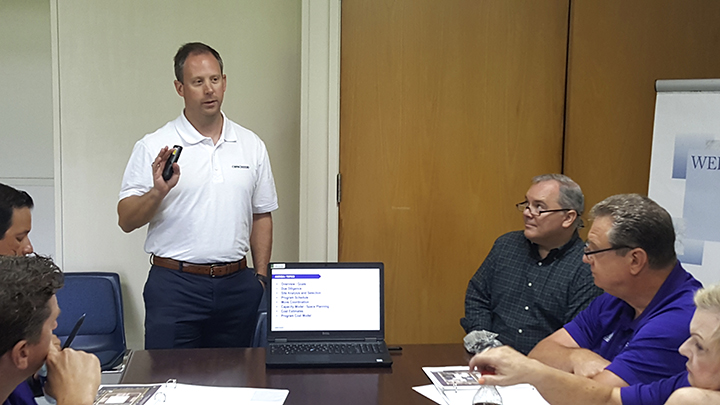 Gary Whittle, project management director with CBRE/Heery, presented preliminary information Monday to the school board about reducing six elementary campuses and a prekindergarten center to four elementary campuses, two in each city.

Preliminary sites include the current Woodcrest and Ridgewood sites in Port Neches and the current Groves Elementary and West Groves Early Childhood Center sites in Groves to create a pre-K to second grade and a grades 3-5 school in each city. In addition, the third-to-fifth grade schools could possibly be two-story facilities, as was discussed in the meeting.

Whittle was working from a 2015 demographic study and facilities study with plenty of input from maintenance director Jeff Bergeron, who provided geotechnical information, surveys, site information and more for each property as well as meeting with administrators.

Woodcrest Elementary in Port Neches has about 8.16 acres of land and could work as the site for a third-to-fifth grade campus. Port Neches Elementary is one of the smallest properties in size at around 6.5 acres and, because of its proximity to Port Neches Middle School, would not serve as a good site, Whittle said.

Ridgewood Elementary, however, has almost 18 acres of land and is the largest piece of property in contention and although there is no access from the back of the property, it would be ideal for a pre-K to second-grade campus.

Van Buren Elementary shares property and is adjacent to Groves Middle School and would not be a viable choice.

Groves Elementary, with 14 to 15 acres of land, is feasible as a site while Taft Elementary, which is relatively small, was crossed off the list of possible sites for a number of reasons, he said.

WGEC, he said, is a good location and can serve as either prekindergarten to second grades or third to fifth grades.

All of the elementary schools would eventually be demolished, with the exception of Taft.

The district’s bond attorney, Lance Fox, was at the early afternoon meeting in Port Neches and said CBRE/Heery did an excellent job with the presentation.

The board of trustees has a week to study the preliminary proposal before the Aug. 12 board meeting, where they will decide whether to place the issue on the November ballot or not.

Earlier this year, trustees unanimously approved exploring a bond election to be placed on the November 2019 ballot. This stems from previous talks of a possible bond back in 2015 where a facilities committee recommended reducing from six to four elementary schools.