Give it a twirl: Elle Mallett, Meagan Cole follow in moms’ footsteps 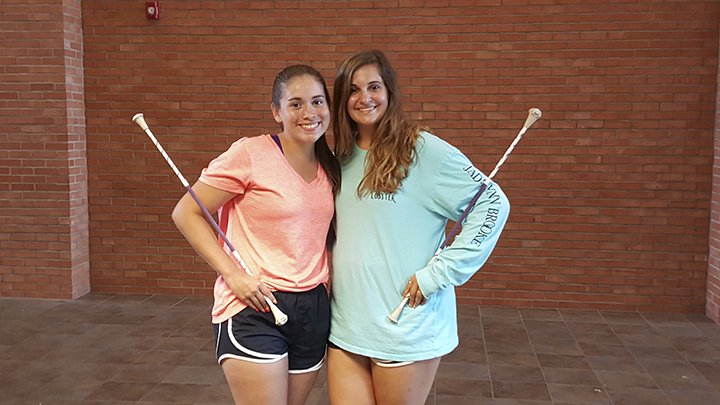 PORT NECHES — Elle Mallett and Meagan Cole are twirling their way along with family tradition.

Mallet and Cole are co-head twirlers at Port Neches-Groves High School and both seniors have family members who were twirlers — Mallett’s mother Debbie and Cole’s mother Stephanie.

In fact, their mothers twirled together for at least one year at the high school.

As they spoke, each girl easily spun their batons near non-stop from finger to finger, and while they have perfected their work, twirling wasn’t their first choice years ago. Cole, who has taken dance classes for 14 or 15 years, once wanted to be part of the school’s prestigious drill team, the Indianettes. But she decided to follow in her mother’s, as well as her sister’s footsteps.

“I loved watching my sister twirl and thought it would be more fun,” Cole said.

“I tried karate, softball, I was in dance for nine years. My mom was a twirler and I thought, yes, this is what I want to do,” Mallett said.

Mallett’s grandfather, Cruz Maciel, is another reason she wanted to give twirling a whirl. Her grandfather holds season football tickets and sits near the band, where he can watch Mallett twirl just as he did her mother years ago.

Cole credits her grandmother, Phyllis Hoffpauir, as her biggest supporter. She has been to every recital of hers, as well as those of her sister and mother.

The co-head twirlers are also involved in academics and looking toward their future as gradates of the class of 2020. Mallett is in HOSA — or Future Health Professionals — formerly known as Health Occupations Students of America. She aspires to go to Lamar University and major in nursing with the goal of becoming a neonatal nurse.

Cole, who once wanted to be a teacher like her mother and sister, is now looking toward the culinary arts. She plans to go to Lamar University with the dream of owning her own bakery.

Elle Mallet is the daughter of Debbie Mallett and Robert Mallett.

Meagan Cole is the daughter of Stephanie Cole and Philip Cole.