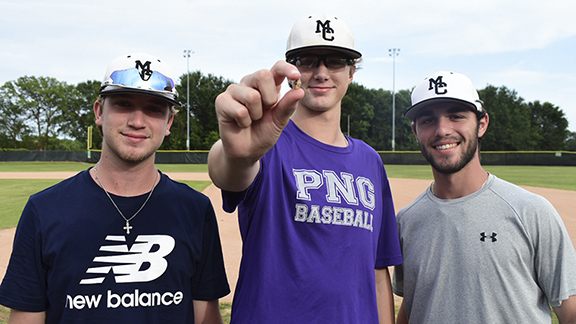 Carson Roccaforte was already known as an offensive threat. Tuesday was his day to pitch Mid-County into the semifinals of the Babe Ruth 16- to 18-year-old World Series in Mobile, Alabama.

Roccaforte tossed six strikeouts and scattered six hits over a complete game in leading Mid-County to a 7-1 win over Bakersfield, California, earning the No. 1 seed in the National Division and earning a first-round bye. Mid-County will play at 7:30 p.m. Thursday against either the American Division runner-up or National Division third-place team. The championship game is Friday at a time to be determined.

Bakersfield dropped to 3-1 in division play to tie Mid-County but settles for the No. 2 seed with the head-to-head loss.

For now, the Babe Ruth World Series has been Roccaforte’s time. The Port Neches-Groves senior, who was just named 5A All-State honorable mention, has batted 6 for 11 with a home run, eight RBI and five runs scratched. That includes going 2 for 2 with a triple, an RBI and two runs scored Tuesday.

More importantly, it was Roccaforte’s arm that helped Mid-County (12-1) extend its stay at least into Thursday. He walked just one and gave up Bakersfield’s lone run, which was earned.

Mason Brown went 2 for 3 as well, helping Mid-County spray 14 hits. Landon Hiltz has continued a hot streak at the plate as well, going 3 for 4 with an RBI and run scored. Hiltz, who is 8 for 14 with three RBI and five runs scored, has hit safely in the past four games and lined two or more hits in three of them.

As in each of Mid-County’s wins in Mobile, the opponent scored first, as a single scored a Bakersfield run in the top of the third inning. With two outs in the bottom of the inning, Hiltz ignited a 5-spot with a single. Adam Roccaforte kept the inning alive with a single to set up his first cousin’s triple to center field to drive home Hiltz. Smith (double) and Mascorro (single) then delivered one-run hits.

The rally went into the fifth, as Davila singled with two outs in the fourth and an error on Mascorro’s grounder allowed Carson Roccaforte to score.

Jarett Brannen, Matt Miranda, Kobe Silva, Austin Hubbell, Brady Galvack and Haiden Concad each singled for Bakersfield, located between Fresno and Los Angeles. Concad struck out two, but gave up five earned runs on six hits in three innings. Rob Moralles allowed a run on five hits in the fourth, but Isaih Falardo struck out two and gave up three hits in the final two innings.