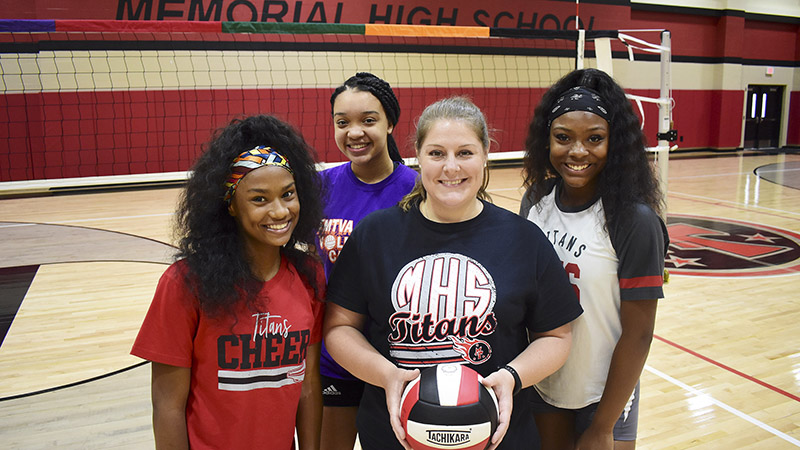 Sommer Lough set her sights on coaching at Memorial High School when she first worked in the Port Arthur ISD.

“I’ve always wanted to coach here,” said the 2004 Hamshire-Fannett graduate, who was hired in May. “When I coached at TJ [Thomas Jefferson Middle School], I waited for the opportunity for this position to open up.”

Lough (pronounced “low”) worked four years at TJ before going to Port Neches-Groves to assist with basketball and golf, but she was not on the volleyball staff there. Now back in Port Arthur, Lough joins PNG’s Brittany Fruge as a first-year head coach in District 21-5A.

Lough succeeds Bianca Dixon, who stepped down after five seasons to spend more time around her sons, who are playing football. One goal that hasn’t changed in the program, however, is finally breaking into the playoff field.

“I think it made the younger classmen want to play more,” senior right-side hitter Alaya Riles said. “They saw how excited we were when we won and energized we be when we play.”

Riles played with Lough at TJ, so she knows her style.

“She’s very patient with us,” Riles said. “She stops us in our tracks if we’re doing anything wrong. She has a lot of skill, and she’s an all-around good coach.”

After losing a large senior class and bringing back two players with varsity experience from 2018, Lough believes 2019 is a ‘building year for sure,’ but she thinks the Lady Titans can take another step of progress.

“I have quite a few seniors,” she said. “I think I have a total of five, and I hope they can just bring everybody together because this is their senior year and pull it out of everyone to try their best. I have a very talented group of girls, and hopefully we’ll be able to win games in district and make it to the playoffs.”

Common among other local volleyball teams, the Lady Titans are taking a positive approach to the season.

“We will bond as a team and stay positive,” senior outside hitter Kaylee Sanders said. “We just teach [younger players] what we already know and let them catch onto our skills, and they can be good as us.”

“Club volleyball is much faster,” she said. “It moves much faster than school volleyball, so it helps you get on a higher level than high school, and it helps teach the younger ones on a club level.”

Friday was the second day of full volleyball practice for UIL teams, but Lough caught a glance at her players during open gym this summer.

“Some strengths we have at the varsity level, we have great blockers and we have great hitters,” she said. “But we also have two great liberos or defensive specialists.”

Ask Sanders, and she’ll tell you “everybody” is another strength.

“Everybody just has a part,” she explained.

Now that Lough has the job she’s wanted for years, it’s a matter of putting together a solid run in a solid district.

“I hope to figure it out,” Lough said with a laugh. “I just want to stress to the girls we want to make progress. We want to move up in district. I know we have a very tough district, but I think if we put it all together and we keep the momentum going through district, then we have an opportunity to get into the playoffs.”