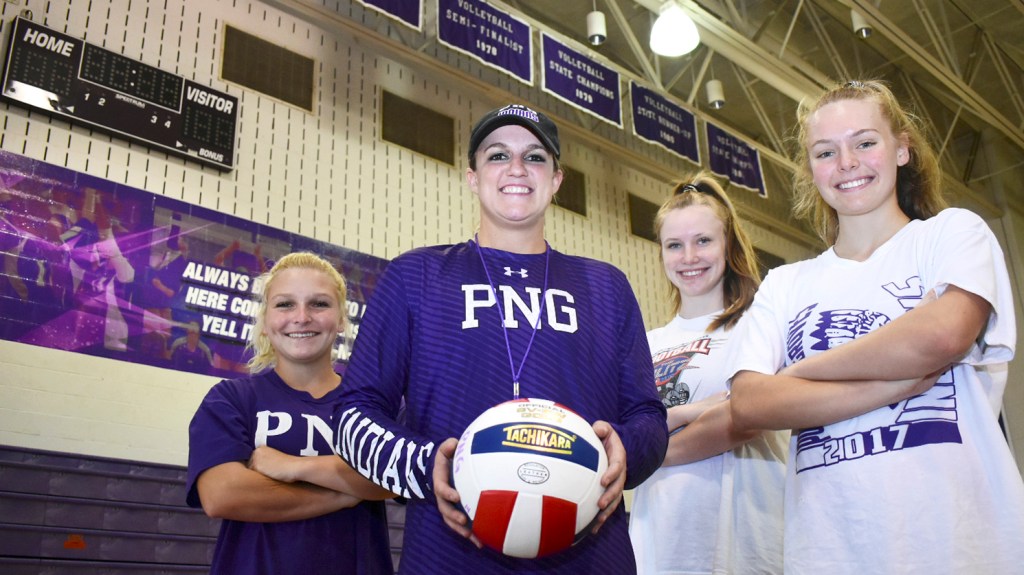 PORT NECHES — Since Brittany Fruge has held the title of head volleyball coach at Port Neches-Groves for three months now — and has experience leading the girls track and field team — the 30-year-old has an idea of how to build on the tradition of maybe Jefferson County’s most storied program.

“We don’t want to peak too soon. We want to take it one game at a time,” Fruge said. “We’re real big about setting small goals and going after those. We want our long-term goals. We want a district championship back at PNG. We want to go farther in the playoffs. We’ve got to take care of the small things first and do the small things well because those things will add up and make the difference in the long run, when it comes to playoff time.”

Fruge is the first head coach of the Rock-A-Noos other than Barbara Comeaux since 1972. PNG won 1,272 matches under Comeaux, making her Texas’ all-time leader in wins. The three-time state champion (1972, 1979, 1981) and Texas Girls Coaches Association Hall of Fame coach stepped down from volleyball duties but is remaining at PNG as girls athletic coordinator and girls golf coach.

Fruge was a part of many of those wins as a player — the former Northwestern State standout graduated from PNG in 2007 — and as a first varsity assistant for the past six years.

Thursday was the first day of full practices for UIL volleyball programs. With just four days before the season starts at home against Bridge City, Fruge seems to already be making her mark.

“I would say she’s the same, but more intense,” senior setter Breeana Riggs said. “It works. I like it. … I think we’re pushing harder than we ever have before, definitely, and we work hard every day. Her intensity with that, it hypes us up more to be better.”

Fruge’s youth and recent experience as a player also helps her relate to today’s players.

“Her volleyball IQ is like way updated,” senior outside hitter and fourth-year varsity player Liz Bolyard said. “She’s knowledgeable about the game. She knows a lot of new things about it, and she teaches it to all to us, and it really helps us in the games and stuff.”

The focus this summer, Fruge said, has been to build consistency in ball control. The Rock-A-Noos are returning seven varsity players from a 33-7 team that finished runner-up to Barbers Hill in District 21-5A, ending a two-year championship reign from the 22-5A days.

“We are also working on coming together as a team,” she said. “We have some new faces that are going to be coming up to the varsity.”

Luckily for the Rock-A-Noos, the experienced Bolyard is back.

Seniors Layla Stansbury and Maylin Louvier are expected to be versatile scoring threats as well, with Riggs handling setter duties with the ability to play anywhere on the court. Seniors Kasidee Sartin and Halley Smith will lead the defensive charge, with Trista Hughes moving up from the 2018 freshman team to the varsity.

“She’s pretty much identical to me and Halley in what she does,” Sartin said. “We’re pretty good.”

Fruge said she hasn’t made many changes, but she added the Indians are speeding up their offense and hoping to become smarter on defense.

“Not a whole lot of changing,” she insisted. “We had a good thing going.”

That good thing has produced 31 district championships under Comeaux. This year’s 21-5A race, Fruge believes, will be more wide open as all seven teams have graduated large classes.

“Every match is important,” Fruge said. “Every night is important. There’s no team that’s going to be an easier night for us. Every team will be respected.”