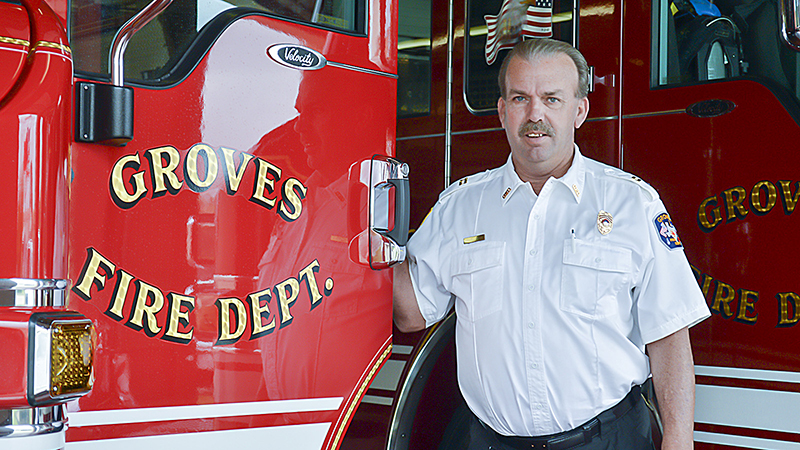 Foret served for 41 years and nine months as a paid firefighter and served three years as a volunteer before that, beginning at age 15 in the Junior Firefighter Program.

Through the front door

Foret was just 13 when he walked to the front door of the station wanting to do community service while a Boy Scout, but he was too young. That didn’t stop him and he stayed around the station doing other tasks, such as developing photos in a dark room.

By the time he was 15, the city changed its ordinance on an age requirement and he was able to become a Groves Junior Volunteer Firefighter.

“I hired in right after high school,” Foret said. 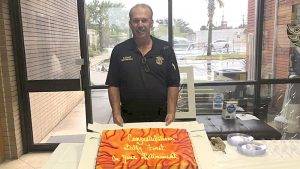 The longtime firefighter has seen a lot in his career, which officially began in 1977.

“I’ve worked with some mighty fine people,” he said. “There’s been a lot of tragedy come along and also a lot of happiness to see. The city has made it through hurricanes, and our department was instrumental in getting the city rebounded from those events. I’ve made some lifelong friends working that job.”

Groves Fire Chief Dale Jackson has known Foret throughout his career and said Foret always looked out for what’s best for the department and the community.

“He was instrumental in every step of progress we have in the department,” Jackson said. “He was heavily involved in the purchase of the new fire truck from speaking with the manufacturers to making sure we have the best bang for the buck to make sure it’s what’s needed, not just now but for the future of the department. He will be sorely missed.”

Foret, who twice earned the Otis Barnes Firefighter of the Year Award, was instrumental in many projects in the department and, as captain, trained new hires as they came up the ranks.

“Billy took a lot of those guys under his wing,”Jackson said. “He was very patient with them and taught them not only how to serve the public but to keep themselves safe. I’m extremely happy he’s reached the time in his life where he can retire and I know he has a lot of things lined up.”

Foret said he is ready to relax.

He plans to play some golf, do a little fishing and spend time with his family.