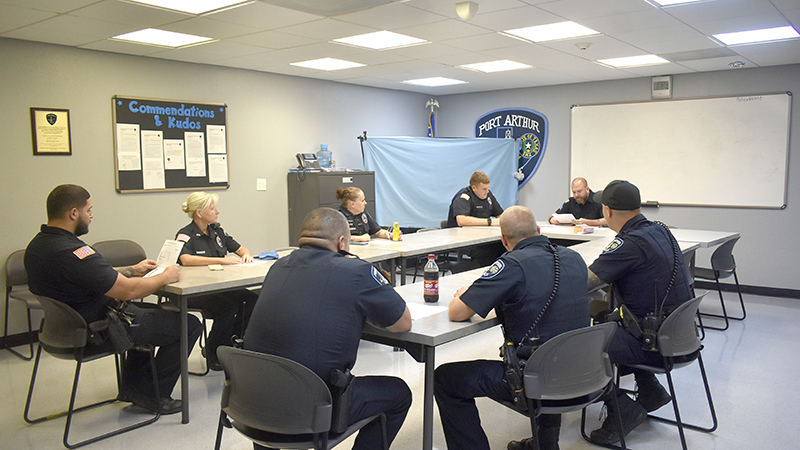 Port Arthur police officers are briefed on recent crime during a meeting at the Port Arthur Police Department on Tuesday. (Mary Meaux/The News)

Port Arthur police will roll out their newest crime-fighting strategy Wednesday with an aim of reducing violent crime.

PAPD Det. Mike Hebert said this isn’t a knee jerk reaction to the recent uptick in violent crime — the newly formed Crime Response Team has been in the works for quite some time.

“The unit is going to be driven by violent crime statistics,” Hebert said. “They (team members) will meet with the statisticians who will show them areas of the city where you might see a jump in violent crime. The whole basis of the unit is to bring down violent crime in the city and that’s what they’re going to do.”

Hebert said they have been gathering intelligence for months on certain groups with the city that are committing violent crimes.

The department has been short of manpower for a few years and the current administration and Chief Tim Duriso made it a priority to hire more officers. This, in turn, lends the opportunity to add to the team.

Hebert said the CRT will leverage its partnerships with state entities and federal agencies.

“Communication is the key,” he said. “The chief has made that very clear. Whether communication with the patrol unit, our narcotics division or even communication lines with our state and federal partners.”

Some partners — the Bureau of Alcohol, Tobacco, Firearms and Explosives and the Drug Enforcement Administration are in the station on almost a daily basis.

“You can say this unit is the tip of the spear that’s going to address these violent crime issues,” Hebert said.

Port Arthur has seen a number of violent crimes across the city including the shooting of a 4-year-old during a drive-by in the El Vista area of town and a home invasion in which three men — one from Winnie, one from Beaumont and one from Houston — were taken into custody.

How the CRT will work

The recent killing of Joel Lopez Martinez, 42, is one of the crimes the team will work.

“We have persons of interest in that and investigators are still following numerous leads,”Hebert said.

Martinez was shot while trying to flee robbers July 19 outside a home in the 3200 block of 18th Street.

Team members will also get briefed on a Port Neches home burglary where a 17-year-old male from Port Arthur and a juvenile, also of Port Arthur, were arrested. A third person is being sought.

Hebert said those arrested were known to police in Port Arthur. They are believed to be part of the same group of individuals who have been committing auto burglaries, stealing guns and doing home burglaries as well.