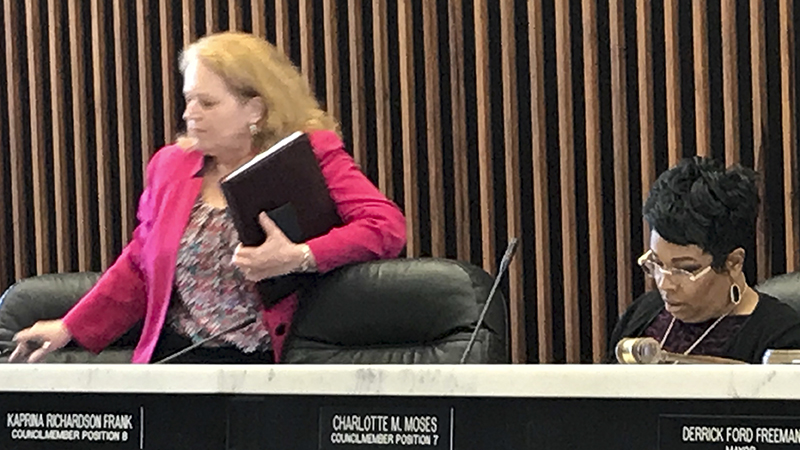 “I’m going to rejoin retirement,” Underhill said Tuesday. “It’s my second time to retire and I hope I do a better job at it than the first time.”

Underhill, who has served about 23 years in various positions during her two stretches of employment with the city, will remain until the City Council chooses an interim replacement. Councilmembers will meet in special session at 3 p.m. Monday.

Councilmembers addressed one agenda item pertaining to the city manager search during the non-consent portion of their Tuesday meeting. That was a resolution authorizing the city manager to enter into agreement with Baker Tilly Virchow Krause of Addison, Texas for “services related to the executive search for the position of city manager in the amount of $24,500.”

Those opposed said that Mayor Thurman Bartie, who was absent, wanted input on the discussion when the group meets Monday.

The city has had an interim city manager since November 2017, when former City Manager Brian McDougal resigned. Since then, first former Assistant City Manager Harvey Robinson and later Underhill have served in interim roles.

Robinson asked Underhill to come out of retirement to help the City Council deal with a host of insurance and government grant programs related to massive damage to the city from Hurricane and Tropical Storm Harvey damages.

“I had done that a couple of times before, unfortunately,”Underhill said, adding she submitted her resignation letter last week.

Underhill replaced Robinson as interim city manager last spring. Robinson, who’d been hired for a six-month interim period, served three times that long after the City Council stalled in efforts to replace him.

“I enjoyed it. I hope I was able to do some good,”Underhill said.