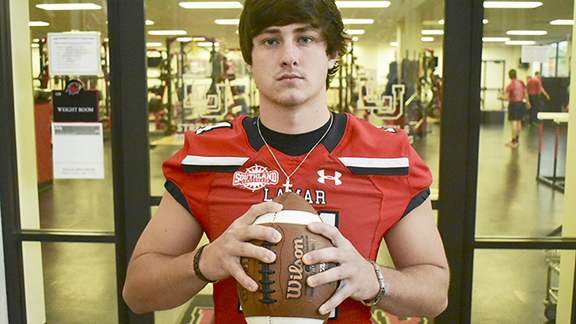 A ruptured disk sidelined Lamar wide receiver and PNG graduate Caisen Sullivan just before the start of the 2018 season. Sullivan has returned in hopes of making a bigger impact on the field. (I.C. Murrell/The News) 7-30-19

BEAUMONT — The end of preseason camp arrived 11 months ago at Lamar University. Caisen Sullivan could look forward to his second season of college football.

.@CaisenSullivan is looking to make more of an impact at @LamarFootball. He was an Academic All-State selection with the @PNGIndians. pic.twitter.com/nbForEavq7

But something wasn’t quite right with his back.

“It happened over time,” Sullivan said. “It started hurting at the beginning of the summer but I didn’t think anything of it. Toward the fall camp, it started to really bother me and I had to go see a doctor.”

Just like that, the 2016 Port Neches-Groves graduate would miss the entire season with a ruptured disc.

“This year, I’m really looking to get back and, I guarantee you, it’s going to be good to get back out there,” Sullivan said Tuesday, a day before Lamar begins preseason camp.

Sullivan’s Lamar online biography incorrectly reports he hauled in a pass for 10 yards against Kentucky Christian in last season’s 70-7 blowout to open the season. Turns out, the 6-foot-1, 198-pound senior-to-be has taken the field only three times in his collegiate career, all in 2017 following a redshirt year.

He’s chomping at the bit to contribute statistically.

“Caisen’s right where we want him to be,” third-year Lamar coach Mike Schultz said. “He’s got competition at his position, two junior-college transfers that are going to be behind him, but Caisen’s done well.”

At PNG, Sullivan was named All-District 22-5A twice and helped the Indians win a share of the district championship, starting a streak of four straight years either sharing or winning it outright. He was one of Adam Morse’s favorite targets at The Reservation, as the two helped the Indians go 18-5 in their last two years and enrolled together just up the road. (Morse transferred this offseason to Division II Henderson State University in Arkansas.)

Sullivan sat out the 2016 season to further acclimate to college football while multiple injuries at quarterback prompted Morse to lift his redshirt. Ray Woodard was fired at the end of that 3-8 season, and Lamar limped to a 2-9 record in Schultz’s first season before pulling off one of the Football Championship Subdivision’s best turnarounds and capping a 7-5 season with the program’s first NCAA Division I playoff game, a narrow loss at Northern Iowa.

The growth of Lamar football before Sullivan’s very eyes, he said, has been huge.

“It was awesome watching them do that,” Sullivan said of the turnaround. “We really bonded as a team last year and got together. Everybody really wanted that, so we’re ready to do it this year.”

Injuries, however, are still plaguing the Cards at receiver. Junior Kendrick King has recovered from a foot injury against Kentucky Christian, but senior Zae Giles, whom Sullivan calls one of his best friends, is out indefinitely with an apparent leg injury.

Competition at wide receiver is still thick, and Schultz makes no apology for that at any position. Even with that, Sullivan’s big break appears to be looming.