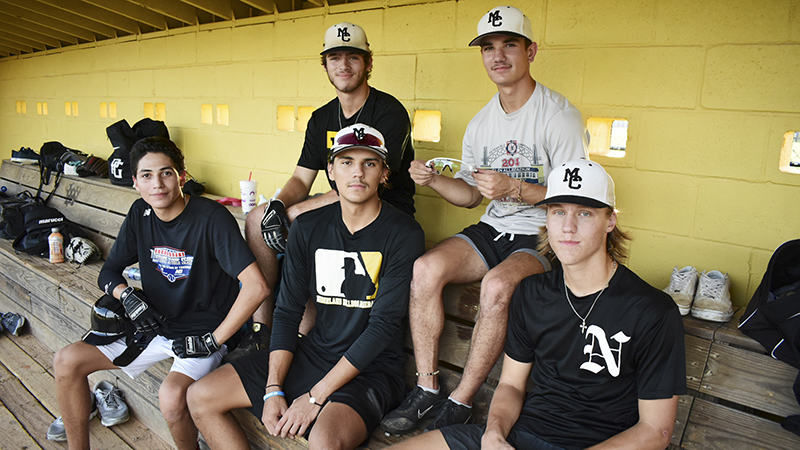 NEDERLAND — Landon Hiltz excelled in baseball and football at Nederland, but that didn’t mean the recent high school graduate knew either sport was still in his future.

“Right after the end of the baseball season, I didn’t know if I wanted to play anymore, but then I decided I did,” the Mid-County second baseman said.

Nederland’s longest playoff journey in a decade had just ended in a controversial loss to Magnolia West in the UIL 5A Region III semifinals. The Bulldogs finished 22-13-2 and went one round further than the year before. As is the case in the Mid-County lineup, Hiltz was the leadoff man who got the Bulldogs going.

One thing helped Hiltz make up his mind: “I didn’t want to give up the game,” he said.

He was going to play in the Mid-County Senior Babe Ruth league, regardless of his college future. Soon after his Bulldog career ended, Hiltz accepted an offer from Coastal Bend College.

Now, a World Series championship — which would be Nederland-based Mid-County’s second in three years — isn’t the only reason Hiltz still plays.

The same can be said about pitcher Noah Gregory, who’s going down to the Beeville junior college with Hiltz, or outfielder Brian Davila, who’s taking his talents to Carl Albert State College in Oklahoma.

Nederland baseball has produced many two- and four-year college players over the years, and the school’s Metreyeon-Delahoussaye Field has given many of its athletes a home away from home from winter to summer. Eleven of the 18 players on Mid-County’s roster call Nederland home, including Kelly Catholic’s Peyton Miller.

For most of them, today’s trip to the University of Mobile in Alabama will be their last road trip from the home of the Bulldogs.

Brotherhood is a common theme in Nederland athletics, a quality often used as a motivating factor to win games and keep a season alive.

“Familiarity helps,” said Davila, who said the most fun part of this summer is “just being able to keep playing with my friends.”

So does staying loose. The Mid-County teammates visibly have fun playing the game, even during practice.

“Bottom line, you have to have fun,” fellow graduate and first baseman Omar Mascorro said. “We’re just goofy like that and have fun all the time.

The fun of the game has rubbed off on Hiltz, who knows his journey in the sport won’t end in Alabama.

Asked who the ringleader of Mid-County’s Nederland contingent is, Hiltz chimed: “I am. I run this.”

One of his chuckling teammates replied: “Sadly,” eliciting more laughter.