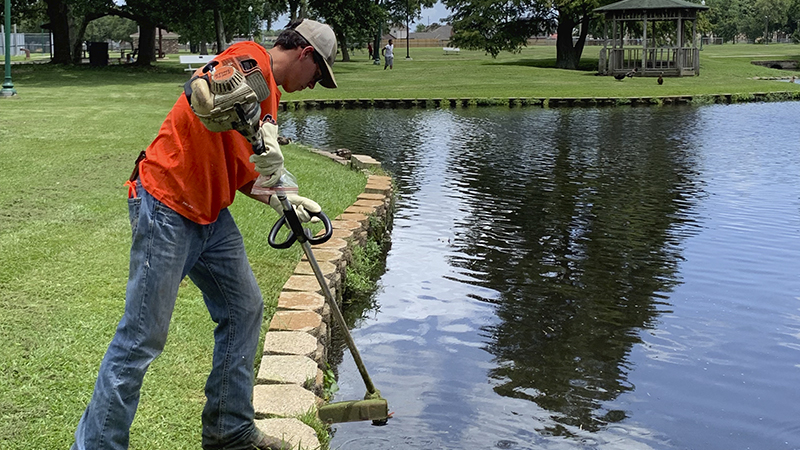 Brendan Minter, Nederland graduate, weed eats Monday at a local park, where he works in maintenance for the Nederland Parks and Recreation Department. Minter is working full-time as he awaits entry into basic training for the U.S. Marines. (Cassandra Jenkins/The News)

Most people associate these two words as the motto of the United States Marine Corps — a concept recent Nederland High School graduate Brendan Minter will become very familiar with in the upcoming months.

The Latin phrase, often shortened to Semper Fi, means “always faithful” or “always loyal,” and can be heard resonating from any ranking Marine official from private to sergeant major.

Minter felt his calling to join the U.S. Marines mid-way through his senior year in high school.

“It’s been something I wanted to do since I was real little,” he said. “It’s just something that I’ve always felt needed to be done — me serving my country. My grandpa was in the Navy and my dad wasn’t really around a lot. My grandpa raised me and he has always had that impact on me to do it.”

Minter looked into the other branches of service, but ultimately settled on the Marine Corp, where he can also receive several benefits.

“It is a calling, but with it I can also get certifications through the jobs I do,” Minter said. “I can also get free education to get a business degree. I’m trying to stay in for 20 years.”

Minter said he wants to eventually work for Motor Transport, a job in the Marine Corp that will require operating and maintaining tactical and commercial motor vehicles, such as trucks and tanks.

“I’m really a jack-of-all-trades,” he said. “My family taught me everything young. I might as well do something that I know how to do and expand my horizon.”

While Minter waits to begin basic training in early November, he has been working at the Nederland Parks and Recreation Department, where a lot of his work will prepare him for entering the Marines. 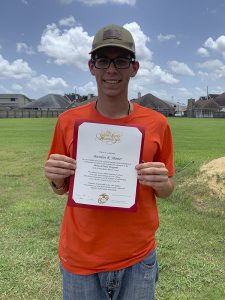 “I work with a crew and in the Marines, I will also be in a crew,” he said. “I might lead a group of people, help motivate and push them to go further than they ever thought they could go. I try to always have that aspect of being a hard worker, so other people can also try to be hard workers.”

Angela Fanette, Nederland Parks and Recreation Supervisor, said Minter is one of the hardest working employees she’s had.

“He’s got a good head on his shoulders,” she said. “He’s definitely very committed to working hard, and I think he has some goals set for himself that he is going to do whatever it takes to attain. He’s very driven, and I think he definitely feels a call to service with his choice to enlist in the Marines. We are very proud to have him in our department.”

Part of his job requires picking up trash in the parks, weed eating, mowing and spraying for weeds and poison ivy. His job is usually spent outside in the heat, which Minter said doesn’t bother him.

“My family started me out young working outside, so it’s just natural for me to be outside,” he said. “I like working in the heat. I like being able to make the city look better and cleaner.”

As the months count down before he leaves, Minter said he has been concentrated on his work ethic, physicality and being the best he can be.

“I’m just stepping it up, getting more physically fit and making sure I’m the best I can be out there so I don’t let anyone down.”

Minter leaves for basic training in November, when he will be sent to a base in San Diego, Calif.