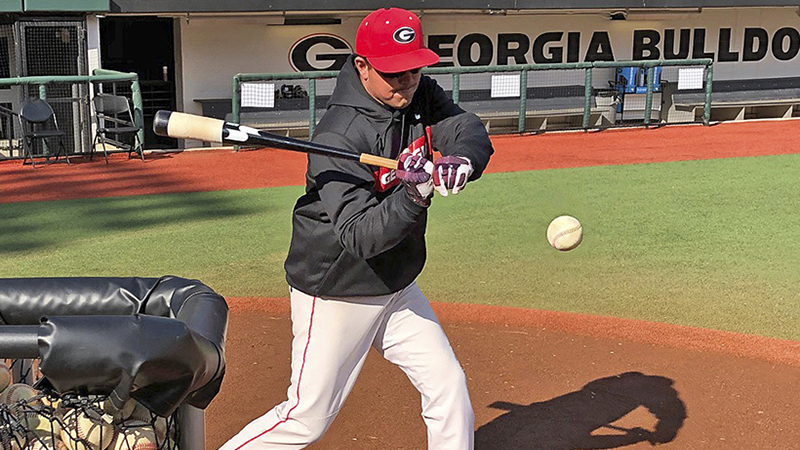 Mitch Gaspard served as a voluntter coach at Georgia during the 2019 season. (Courtesy photo)

The memories are clear because the chief accomplishment was so impressive. The Yellowjackets won the 5A state championship in 1983, which happened to be Gaspard’s senior year.

“The one thing about Port Arthur then and we still hold onto is it was a community thing,” Gaspard recalls. “The town and the city were always behind you. When we were in the playoffs or in big district games, the stadium was filled with people and lawn chairs were wrapped around the stadium. The community was always very much around you.”

I had a chance to speak on the phone with Gaspard this week during a break in his schedule, which included scouting for future college baseball talent in Baton Rouge, Louisiana.

Gaspard has already hit the ground running as Louisiana Tech University’s hitting coach and recruiting coordinator, a position that was announced last week.

After three years coaching in Georgia and Kansas State, the new job allows him a chance to return to a region he knows well and focus on what he does best — baseball.

Gaspard’s career, which includes a head coaching record of 444-331 with Northwestern State (2002-07) and Alabama (2010-16), has been decorated by plenty of stops in Southeast Texas and Louisiana.

He played college ball at LSU and Houston.

However, much of it began with roots established in Groves little league and intense high school competition.

In fact, it wasn’t all built on the baseball field.

“At TJ you almost had to play football,” Gaspard joked. “That was just one of those things. We were so dominant in football that you wanted to play. I loved football and still do. Every year I was in high school we made deep runs in the playoffs.

“Back then, if you were a football player, you went to spring training and had to go to baseball practice after that. I thought football gave you discipline, and the workout regimen was really good. Probably half that baseball team played football.”

Gaspard said the Yellowjackets’ best victory came in the playoffs against Sharpstown High School, which had won the state title the year before and featured future Major League Baseball pitcher Greg Swindell.

Being back in the region is a benefit for Gaspard, who said much of his family and wife’s family still live in the Golden Triangle.

Gaspard is married to the former Kim Howell. They were high school sweethearts, and she was one year his junior at Thomas Jefferson. They have two children – Brae and Paeton.

The best man at his wedding was another star Thomas Jefferson athlete, Craig Stump, who is now head football coach at Atascocita High School.

“Through my period we probably had 15 to 20 guys who got football or baseball scholarships,” Gaspard said. “It was a really good time athletically at Port Arthur and Jefferson County. I was able to build a lot of really good friendships with guys I still stay in touch with.”

Gaspard’s next challenge is helping guide a Louisiana Tech program that suffered devastation in the spring via a tornado that struck its baseball stadium and will displace the team during the 2020 campaign.

Plans for a new $15 million stadium are centered on a 2021 opening.

ASK A COP — Can officers hide to catch speeders?