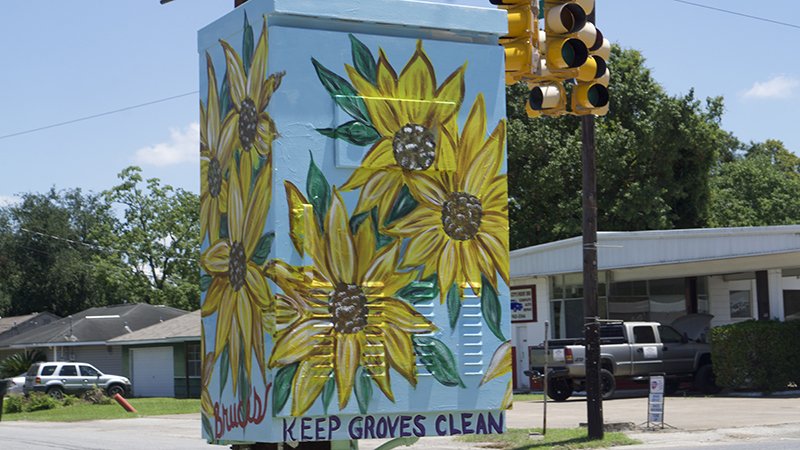 If you wander around the streets of Groves, Nederland and Port Neches, chances are you will begin to glimpse murals, benches, boxes and businesses washed in bright colors and paint splatters. The wall art and interactive pieces along roads and highways are all part of a larger plan to provide the cities with life, color and art therapy.

“This is a national movement,” she said. “It’s happening in all the big cities —Houston, Dallas and Austin. They did it in Beaumont. Then Nederland High School had a mural done by their high school teacher and students. So, I decided it was time for Groves to step up. I looked for someone to be in charge, but no one stepped up so I decided it was time for me to do it. 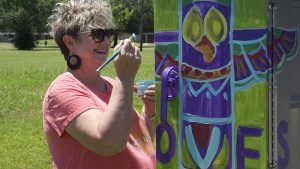 Linda Guillory, local artist and member of the beautification process, works on one of her newest utility box paintings in Groves on Friday. (Cassandra Jenkins/The News) 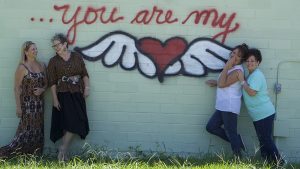 “I contacted the City of Groves. They said there were six boxes that we could paint and they would purchase the paint, but couldn’t pay the artists. In Beaumont, they gave their artists a $100 stipend but we didn’t have any money to pay our artists.”

After hearing that the city did not have extra money to pay the artists, Guillory said she took the matter into her own hands to find sponsors and businesses that could fund the project.

“I contacted Skylar Thompson at the Market Basket Corp., his father, Bruce Thompson, was the founder of Bruce’s on Lincoln Ave., in front of what is now the beautification park and a gothic church,” she said. “I grew up with Bruce. So after contacting Skylar I was able to procure $100 for an artist per box.” 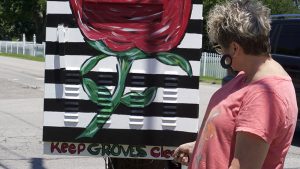 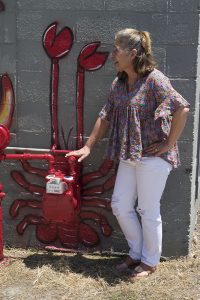 Terri Villemez, employee at Williams Air Conditioning, shows off the crawfish that Guillory painted on a gas meter outside her business on Friday. (Cassandra Jenkins/The News)

“The whole purpose is post Harvey Hurricane recovery to ‘Keep Groves Clean,’ and every box has a Bruce’s logo,” she said. “The effort of all this art is called Art Therapy, for anyone who is still traumatized by the severe hurricane that our area has endured. Art is a way to focus on something other than the tragedy of our losses. Plus, you start painting and you don’t want to stop.”

Guillory said she handed those jobs out to different people and artists who showed up. The group was able to complete the six boxes, but was left wanting more, which inspired the beginning of “bench art.”

“We were able to complete six boxes,” she said. “But I have many painters that would love to do a box, so the Clean City Committee decided to do a bench art contest, whereby a person paints a bench, takes a photograph of it and posts it on our Facebook page. On Saturday, Oct. 5, artists will enter their pieces in the bench art contest that will be held at the Port Arthur Public Library from 9 a.m. to 4 p.m.”

The bench art contest then developed into a fun way for business to promote and advertise their goods. 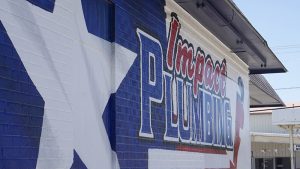 Impact Plumbing, a local business in Groves, received a new mural outside their building in a sponsorship with the city’s beautification initiative. (Cassandra Jenkins/The News) 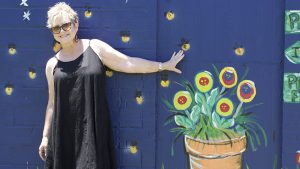 Linda Guillory, local artist and member of the Clean City Committee, points out the fireflies that are painted on a local businesses wall in Groves. The mural is part of the city’s beautification process and one of many around the town. (Cassandra Jenkins/The News)

“No other city in our area has included sponsorships for their artists from corporate donors,” Guillory said. “I saw a bench at Impact Plumbing on 39th and Main St. from an old friend, he gave me his bench to paint and offered us sponsorship money to paint his logo on other benches he sponsored. He has sponsored four benches, one at his location, two at Larry’s French Market and Restaurant and one at Alpha Bitz Daycare — that’s when the contest evolved. Since the boxes were already painted and finished, the benches are our focus to encourage everyone to submit photos of benches that they restored and decorated in the Golden Triangle.”

The bench art contest will be in conjunction with the CaveOILcade celebration and prizes will be awarded at 3 p.m. with a $25 cash prize to the winner, Guillory said.

Along with the benches and boxes, several murals have been painted in the towns with more to come.

“There are plans for murals on KizMet Art Studio and Sundara Coffee Shop on Lincoln,” Guillory said. “A large mural on Sylvia’s Florist and a possible location where a mural once stood on 39th street on Blockbuster which is now a new business. Another location for art is Electrical Solutions on Main Avenue. Janet’s Barbershop has also had her barbershop pole refurbished.” 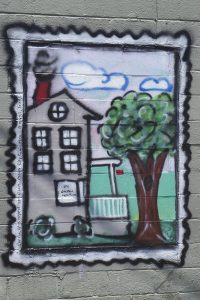 Williams Air Condition Company in Groves sports a postcard-like painting on the outside of their wall painted during the city’s beautification process. (Cassandra Jenkins/The News)

Guillory said she hopes the project will prompt the Golden Triangle community to come out and appreciate the art in their hometowns.

Some of the artists who have painted the utility boxes include Kelsey Thibodeaux, a Groves Middle School art teacher who along with her students painted a box in front of the elementary.

Amy Smith painted the Indian headdress in Nederland High School. Evette Green and another artist painted an armadillo eating a taco at 39th and Main streets.

Guillory painted the black and white box with a red rose with Brook Sutton at Main and Monroe and the “You are My Heart” mural at Home Care Innovations in Groves, along with others.

Paintings can also be seen sparingly around Port Arthur and Winnie.

For more information, or if anyone wants to have their building painted, or their benches decorated they can contact Guillory at 409-549-2601.