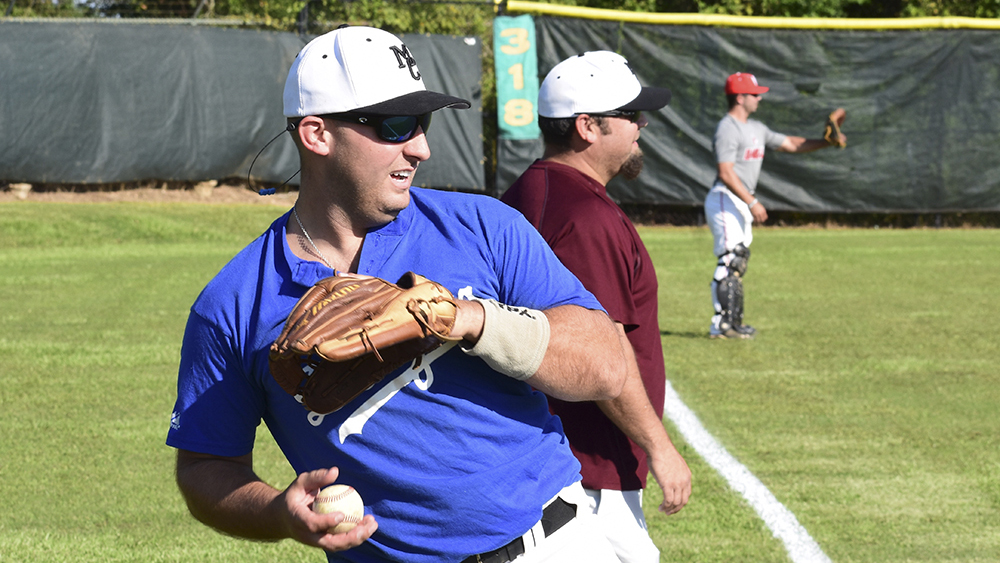 Former Mid-County player and current league coach Trey Terracina warms up on the field before Wednesday’s game between his alumni team and the current Mid-County team going to the Babe Ruth World Series. (I.C. Murrell/The News) 7-24-19

NEDERLAND — Trey Terracina has witnessed the changes to Mid-County Senior Babe Ruth from the time he played to his current days as a coach in the organization’s regular-season league.

“It’s a lot more broad as far as where we’re getting kids from,” said Terracina, a Nederland High graduate who played on the 2009 Mid-County Babe Ruth Southwest Regional team. “Ten years ago, it was mainly near Port Neches-Groves, Hamshire-Fannett, Beaumont, LCM [Little Cypress-Mauriceville] and Bridge City. Now, it’s grown out.

“We’ve got kids as far as Burkeville. We get kids from all around now, and the best part about it is how far in the area it’s grown besides Mid-County.” 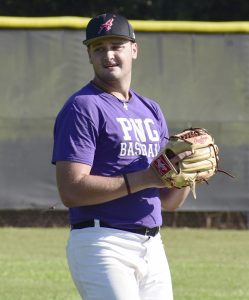 Hamshire-Fannett graduate Ryan Johnson’s time with Mid-County led to a collegiate career that took him from Panola College to Eastern Oklahoma State College to Lamar University, where he finished in 2018.

“I liked playing out here,” Johnson said. “It’s a good league out here. A lot of people from Hamshire-Fannett don’t realize that, but there’s a lot of good competition out here, and it’s stiff when you can come and watch.”

Terracina and Johnson suited up again Wednesday at Nederland’s Metreyeon-Delahoussaye Field as part of a team of Mid-County alumni taking on this year’s Southwest Regional champions in their preparation for the Aug. 2-9 Babe Ruth 16- to 18-year-old World Series in Mobile, Alabama. The 2019 Mid-County team won 3-2 behind Landon Hiltz’s 3-for-3 batting with two runs.

The alumni still got game, but Terracina — who wore his old Mid-County Dodgers jersey from his playing days — is impressed with the 2019 team.

“I watched them play in the [Southwest Regional] tournament,” said Terracina, who coaches the Mets in the regular season. “They’re definitely fast, and they’ve got a lot of depth in pitching. That’s going to be what you need in those tournaments, definitely a lot more than what we had on some of the teams that went to the World Series and regionals.”

Terracina, a catcher and third baseman during his playing days, competed on a 15-under team that placed third in its World Series in 2006, but never made it to that stage in Senior Babe Ruth.

“We made it to the regional finals a handful of times,” he said.

That’s how close Johnson, a former left-handed pitcher at Lamar, came to going to the World Series a few years later.

“We kind of disappointed ourselves,” he said. “We hosted the regionals here and we didn’t even make it out of regionals, but we got to the final game, and the wheels kept falling off.”

He and Terracina agree the 2019 team is more athletic than during their playing days and built around speed.

“We kind of had a couple guys on our team best known for big sticks and not the most agile person,” Johnson said.

“I remember it was so much fun,” Petix said. “It was awesome. I loved the time, and that was probably one of my favorite times playing. It was like playing with a bunch of my friends from all over, Port Neches and Nederland. I loved everything about it.”

Petix likes the 2019 team’s chances of bringing the championship back to Jefferson County.

“I know these kids really well, so I look forward to watching them and looking them up and seeing their stats,” he said.