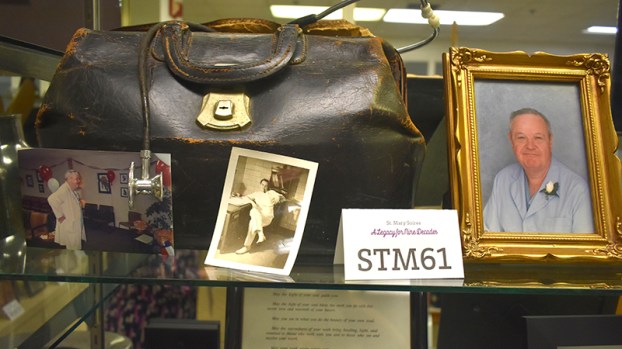 The aged leather doctor’s bag of Dr. Joe Adams sitting on a shelf in the Legacy Room is on loan from his family. The physician came to St. Mary in 1952 and retired in the 1990s, was a general surgeon there and taught at the nursing school in the 1950s. (Mary Meaux/The News)

Pieces of the past: Artifacts give a visual history of St. Mary Hospital

From Dr. Joe Adams’ doctor’s bag with blood pressure cuff and stethoscope to a still-working 1930s X-ray box to emergency room registers and photos, nursing school year books and blue prints of the original hospital — these items are to be saved.

Danielle Pardue and Rebecca Howard with Christus Health brought local media inside the now closed hospital for a glimpse at the items in order to share them with the community.

“We wanted to take this opportunity so people can experience the hospital,” Pardue said. “Ninety years is a milestone for Port Arthur, and while the public couldn’t come here, they can get a glimpse of some of the history they may not know.” 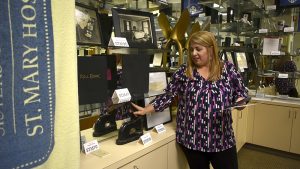 Danielle Pardue shows a Sisters of Charity of the Incarnate Word embosser from 1929. (Mary Meaux/The News)

Many of the items will be donated to the Sisters of Charity of the Incarnate Word, the Diocese of Beaumont and other hospitals.

Some have requested pieces of St. Mary Hospital history since officials announced its closing.

“Requests for items have been in the hundreds,” she said. “Some people are looking for very specific items; those who worked here may want their chair, others just want something, maybe a photo or crucifix.”

Howard said one person requested the doorknob to a room.

“Some are very specific. Go into the room, turn left, the photo on the wall,” Howard said.

Pardue said while they don’t know right now what they will be able to honor or give away, they do have a book to take readers through the hospital’s history.

The commemorative 135-page book chronicles the history of the hospital through the decades and costs $10. All proceeds benefit Children’s Miracle Network. 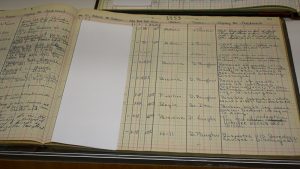 An aged leather doctor’s bag of Dr. Joe Adams sitting on a shelf in the Legacy Room is on loan from his family. The physician came to St. Mary in 1952 and retired in the 1990s, was a general surgeon there and taught at the nursing school in the 1950s.

Also on loan is a pristine nurses cap from the family of registered nurse Bea Wainwright who was the first lay person (i.e., not a nun) hired for the hospital’s operating room. Her daughter Sharon Wainwright Graffagnino worked in the personnel department and her granddaughter Jill Graffignino is currently an emergency room nurse. 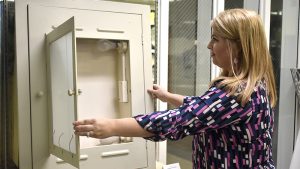 In a courtyard at the hospital is a stone marker in memory of the first field Mass celebrated on the grounds on June 10, 1934. The marker was placed there May 30, 1942. The maker had fallen over and was discovered in the dirt.

Also in the courtyard is the original cornerstone laid in place June 30, 1929, and excavated April 12, 1990, during one of the hospital’s expansions.