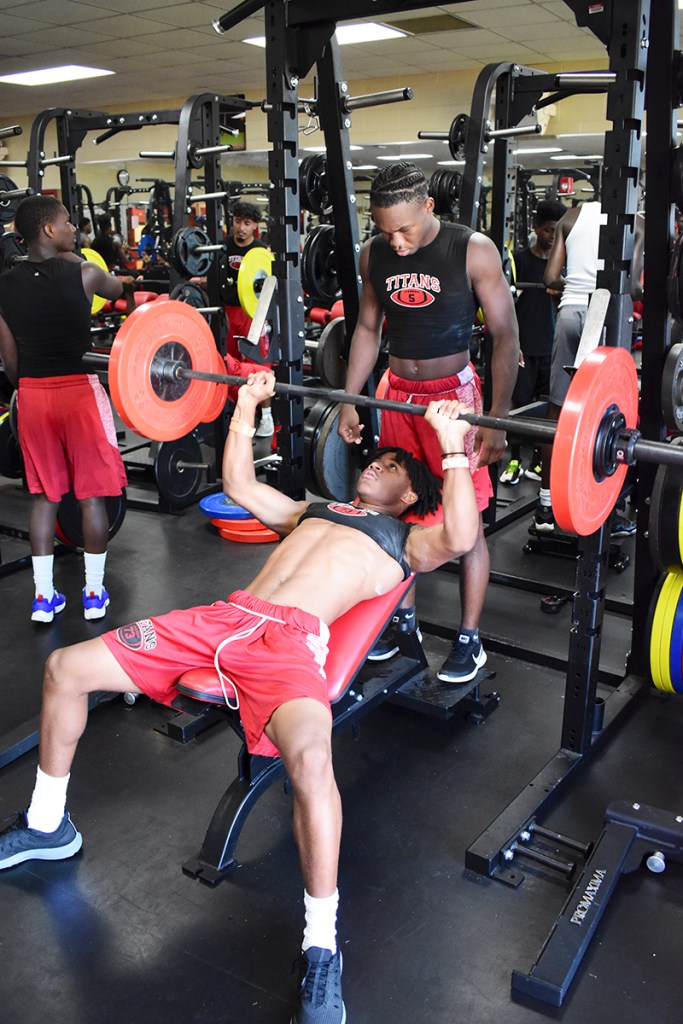 In a summer of change, the Memorial Titans felt quite a change in the weather Wednesday morning. 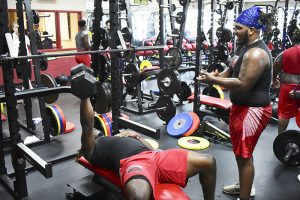 Gone (for now) is the extreme heat that tortured Port Arthur and the rest of the country. This week — and at least the early part of next week — calls for temperatures not to exceed 90 degrees, but with the threat of rain for at least five straight days beginning Saturday.

That’ll be just fine with the Titans.

“It’s good for us,” senior defensive lineman Keoni Evans said. “We get to run a little bit more, and the fact is that nobody wants to cheat. Nobody wants to stop but just keep on going because we have some cooler air.”

Not that the heat, no matter how brutal, didn’t help to sharpen the Titans.

“That’s what we need to make it,” Evans said.

The Wednesday sun shone through the open door and glass windows of Memorial’s fieldhouse with a little bit of air blowing. The players found themselves pushing harder through each repetition in the weight room and outside, feeling the relief from last week’s heat wave across the country that saw heat indices go well into the 100s.

With the heat wave calmed down, Wednesday apparently was a good time for 110-yard sprints.

“Those workouts are really tiring, especially on a day like this when we have to run 110s,” senior running back Jatavian Neal said. “We have at least 30 of them and we barely get a break, so that’s really tiring.”

Second-year head coach Brian Morgan said the Titans typically fight through each repetition regardless of the weather.

“I think for them to get through it, the seniors have to lead because it’s hard,” Morgan said. “One thing we focused on this year, going into Year 2, is those guys becoming our voice and those guys doing the coaching and encouraging, so that’s been great to see that senior class has really gotten some good leaders as well as players in it.”

Across the weight room from Neal, Evans was vocal in encouraging junior defensive lineman Jordon Thomas during shoulder presses. Thomas was equally as vocal with Evans on the bench.

It’s an example of the senior leadership strength and conditioning/tight ends coach Josh Miller has praised along with Morgan.

“We’ve had a really great summer,” he said. “A lot of little things [are] being pushed, and our guys have responded really well. We’ve had a great turnout all summer, and the true blessing is that our older guys are really starting to take into leadership roles. As a coach, when you can step back and allow those guys to not only verbally tell these other guys what they should do but also lead by example, you know you’ve got something really special.”

This summer marks the first the UIL has allowed athletic programs to conduct sport-specific skill instruction during the summer. Under the policy approved in January, strength and conditioning may be held for two consecutive hours each day, Monday-Thursday (with the exception of the July 9-10 and July 22-23 periods of no activity) along with no more than two hours per week (no more than one in a day) of sport-specific skill instruction.

Morgan conducted spring practices in April, which means the Titans must wait until Aug. 12 to begin preseason camp. Teams in classes 5A and 6A that did not conduct full-contact drills may begin Aug. 5 along with those in the other four UIL classes.

“With us doing spring ball as well as having an early start to our school, I mean, we’re not in a two-a-day situation at all,” Morgan said.

“But we feel like with the UIL changes to its summer rules that lets us do skill work with them and skill instruction with them, as opposed to not doing it, we make up those days, and we had a great spring,” Morgan added. “I really feel like we’re way far ahead of where we would normally be.”