Drive-by shooting shocks El Vista area neighborhood: “It happened real fast. Everybody was on the floor” 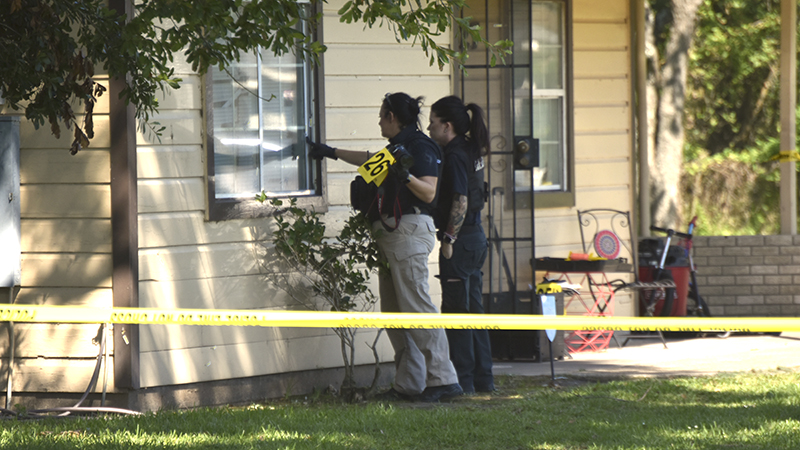 Port Arthur police crime scene technicians look for evidence at a home in the 5600 block of Grant Avenue that was struck by multiple bullets. A 4-year-old child was shot in the back. (Mary Meaux/The News)

A normally placid El Vista area neighborhood was awakened by gunfire Wednesday morning by a drive-by shooting that left a 4-year-old child shot in the back.

The child was asleep in a front room of the home in the 5600 block of Grant Avenue when more than a dozen bullets struck the house around 6:21 a.m. The wood-framed home was full — seven people were inside, including Marshall Eddie, who had just spent 28 hours traveling from Germany to the states and was visiting with his sister and family.

Eddie said the family went to bed around 4 a.m.

Eddie, who is retired from the military and now works for the federal government, was in a back room. He said a bullet went through a wall, and broke through to the back room, knocking sheetrock onto his face.

“It happened real fast,” Eddie said. “Everybody was on the floor.”

The former soldier remembers instinctively reaching for his service weapon, which he did not have, as the family jumped to the floor for safety.

“I didn’t know if a car was involved or if they were on foot,” he said.

Multiple Port Arthur police officers and two crime scene officers gathered evidence at the scene Wednesday; Eddie’s rental vehicle sat in the front yard with the driver’s side window busted out from gunfire. Other vehicles there were hit, as well.

Port Arthur Police Det. Mike Hebert said only the child was hit in the gunfire. He was transported to a Beaumont hospital where he was scheduled to undergo surgery Wednesday morning and was listed in stable condition.

Police do not believe this was a random incident.

Neighbor Roger Batiste and his daughter heard the shooting and went to the front door to see what happened.

“They got out of here so fast I didn’t even see the car,” Batiste, who has lived on Grant Avenue for 25 years, said.

Elbert Jacobs and O. Foreman have also lived in the neighborhood for decades and were shocked by the drive-by. Jacobs said things like that have never happened there before.

“I’m shocked. It could have been my house,” Jacobs said. “I don’t do social media and all my nieces and nephews have been calling my house.”

Forman didn’t hear the shooting and learned about it when he stepped outside his home. He too said the neighborhood is usually quiet and things like this don’t usually happen.

He might start to be worried about crime — and might not be sleeping in the front of his house at night until police find out what happened.

And that’s what police are doing.

By midday Wednesday police were following leads but information such as possible suspects or motive was not available because it was still early in the investigation, PAPD Det. L. Thomas said.