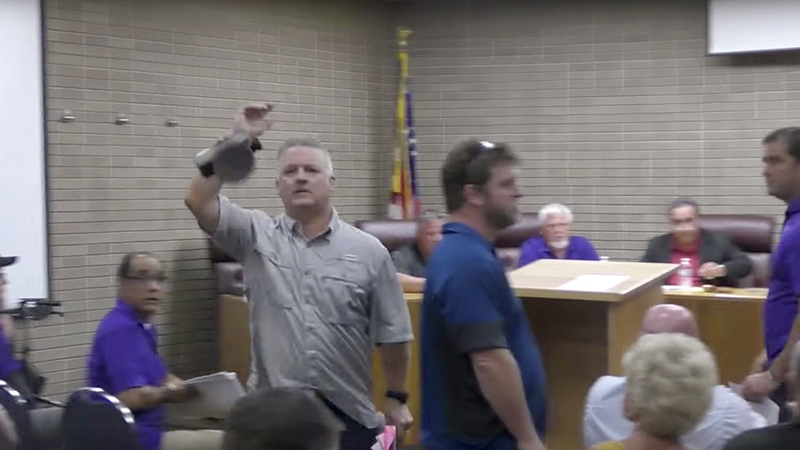 This screen capture of a video uploaded to YouTube by Groves resident Shawn Escagne shows Mayor Brad Bailey tossing a remote camera during a city council meeting on Monday. (Special to The News)

GROVES — An incident that happened after a Groves City Council meeting this week followed sustained conflict between the city’s mayor and a citizen.

The incident, partially chronicled by Groves resident Shawn Escagne, shows Mayor Brad Bailey abruptly rise from his seat at the conclusion of the meeting, walk to the podium and toss underhanded a remote camera toward Escagne on Monday night.

Different viewpoints emerged as to what happened and what led to the incident itself.

At the conclusion of the meeting, Bailey called out Escagne for calling Bailey’s place of employment some 16 times; for calling Baylor University, from where the mayor’s son recently graduated, to inform them of the mayor’s performance; and repeatedly calling the mayor himself.

“He went on a tirade about me,” Escagne said Tuesday about the incident.

Escagne said he feels Bailey is not doing a good job as mayor and that he plans to file charges against Bailey for tossing the camera at him.

Escagne previously streamed the Groves City Council meetings on Facebook Live. Then on March 4, Escagne began recording video of the meetings and uploading them to YouTube and sharing them on Facebook.

Bailey shared with news media representatives an email he said was sent to him from the vice president of human resources at his place of work. The email states that Escagne called Bailey’s employers 16 times, left several voicemails and called the company’s general counsel and left a voicemail saying he couldn’t get anyone from HR to call him back.

The HR person reportedly called him back and was told by Escagne he had issues with Bailey as mayor and he had posted YouTube videos that had over 2,000 hits.

The HR person asked what Escagne wanted from the company, and Escagne said they shouldn’t have Bailey representing the company, then threatened to call a Houston TV station to let them know Bailey was employed there.

“He commented that he was going to destroy your son’s golfing career and yours as well,” the HR representative’s email to Bailey read.

For Bailey, going after his son, former Baylor golfer Braden Bailey, was too much. The younger Bailey plays professional golf in Canada.

“You start to bring family into that … that line has been crossed,” the mayor said.

Bailey said he believes he was drawn into action.

Groves Councilmember Karen Theis, who witnessed the tossing of the camera, said she felt disappointed at the mayor’s behavior.

“I felt like this is something that should have been handled outside the council chambers,” Theis said. “This did not pertain to city business and I look forward to the day we move past this and work toward the benefit of the city.”

Both Bailey and Escagne said they would seek legal action.