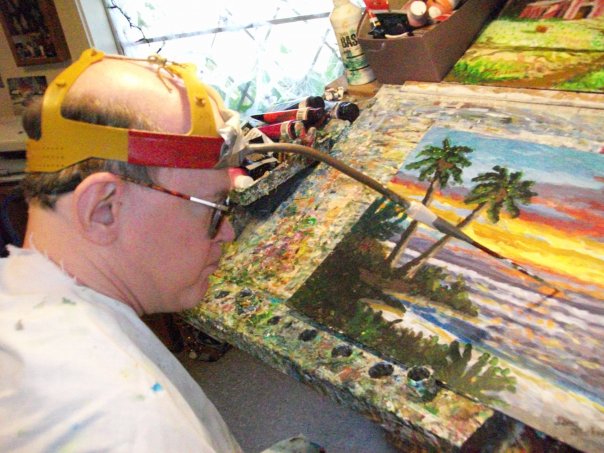 Fifty-five years after he took up his brush, the Port Arthur native and impressionist painter will offer 53 of his works in an art show and sale at The Museum of the Gulf Coast from 3-5 p.m. Aug. 3. This year marks his 55th year of painting.

Jackson, born in 1953, was born with cerebral palsy — he is unable to use his hands or legs — but began painting at age 11 by using a head stylus, designed by his father and his art teacher, to enable him to make brushstrokes by moving his head. It’s been a lifelong artistic pursuit, one that has enabled him to mingle with some famous people. 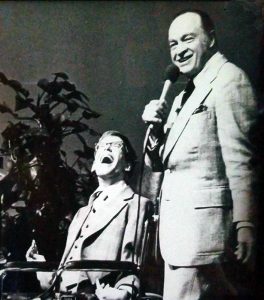 “He started out painting while lying on the floor,” said museum director Tom Neal, who said Jackson’s first painting, “A Summer Place,” was created with an easel his father crafted from an old dresser.

He’s spent decades doing painstaking work that has gained him some widespread acclaim.

In addition to painting without use of his hands, Jackson communicates using a computer.

Jackson once did a seascape for former U.S. Rep. Jack Brooks, D-Beaumont, who hung the painting in his own home. At the former Hughen School for Crippled Children in Port Arthur, where Jackson studied, he met legendary entertainer Bob Hope, who did charitable work for the school. 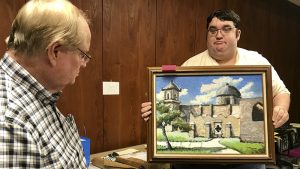 “All of these people have been taken aback by Doug and his stories and his skills,” Neal said.

Jackson previously served as a judge for a museum art show.

Neal said Jackson, who lives in a nursing home in Groves, was inspired by Monet and the impressionists and uses photos and his own travels to inspire his creations. His paintings, Neal said, celebrate natural beauty, life and faith. 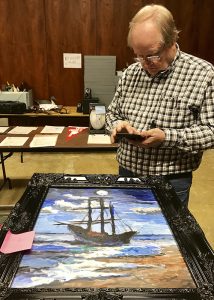 Tom Neal stands near a painting that will be included in the show. (Ken Stickney/The News)

Neal said Jackson’s work was displayed at the museum five years ago, when he marked 50 years as a painter.

“It was a big deal,” Neal said of the show. “People really did enjoy it and he is known through the community.”