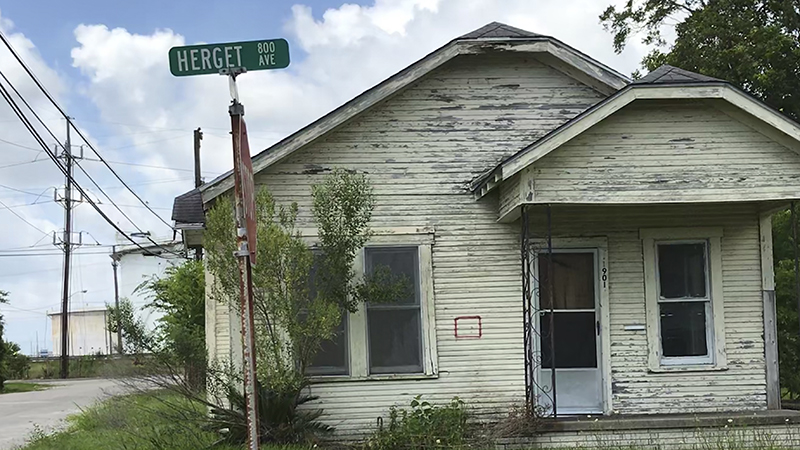 About 20 homes in the Pekin Addition may be eligible for buy outs. (Ken Stickney/The News)

Essentially, she said, the city would use the $4.1 million allocated to it by a Community Development Block Grant program to buy out targeted homes — as many as 30 — located near the Valero plant in West Port Arthur and at least one flood-prone neighborhood in Port Acres.

Those areas would include:

City Councilmembers at their Tuesday night meeting also asked if the planners could consider including Montrose Addition No. 1 as part of the buyout program. Like the homes in No. 2, homes in No. 1 are in a special flood-zone area as determined by FEMA.

The Pekin Addition homes have been under review since a federal study of the area launched after Hurricane Ike, which occurred in 2008. Study results showed in 2010 that the neighborhood “did not meet acceptable separation distance for thermal radiation for people” because of the oil tanks. The lots, many built for narrow “shotgun” homes, no longer meet city standards.

Langford said this week that meant that federal money could not be spent to repair or replace homes in that flood-prone area. Rather, the residents in that hard-pressed area would have to move or pay for their own repairs.

The Port Acres neighborhoods are also flood prone, planners say, and would present the risk of “repetitive” losses because of that. Again, federal money couldn’t be spent to repair them — not over and over — on the same flood-prone locations.

Langford said the city’s efforts under the buyout program are only beginning. Buyout program guidelines mandate that maximum assistance amounts must be established, target areas selected, and other eligibility requirements established.

In her presentation, she said city planners must meet with residents in the designated areas to gauge their interest in a buyout. The city would also appraise the homes in the areas.

In public meetings — no schedule has been set yet — city planners would also introduce neighborhood residents to other options for housing, such as those offered by the Port Arthur Economic Development Corp.

“However, it would be up to homeowners’ discretion,” Assistant City Manager Ron Burton said.

He said the Herget and Foley area includes many older residents, who are likely on limited incomes and may be uninterested in some programs that might be offered.

“It has to be voluntary,” he said. “We will provide them with relevant information.”

Under the buyout program, the city would have money for about 30 new homes.