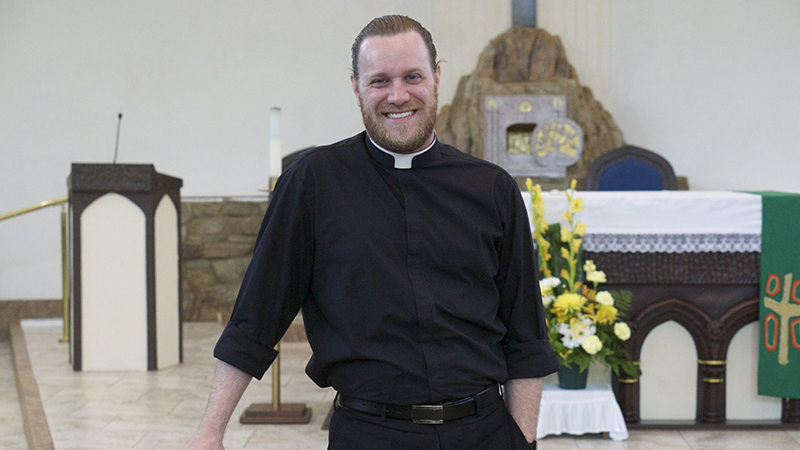 Anthony McFarland is the newest parochial vicar at St. Joseph Catholic Church in Port Arthur. He was ordained in June. (Cassandra Jenkins/The News)

Father Anthony, or Anthony McFarland, as he was known in 2008, was working as a human resource representative for Toys R Us and attending Lamar University for business management when he realized he wanted to enter the priesthood.

Now, at 32, he is the newest parochial vicar for St. Joseph’s Catholic Church in Port Arthur.

“I was going to school full time and I was also paying for my own college,” he said. “I started at Toys R Us as a seasonal employee. Then I was kept on and I decided I needed to do more if I was going to be able to pay for school. When a supervisor position opened up I said I wanted one. It started out as storeroom and transitioned to human resources — that was the hinge point for me.

Although he said he loved working with people, McFarland said he started to realize that he didn’t see a future in what he was doing. So, he said, he turned to God to ask what he should do.

“That saying, ‘Be careful what you pray for’ — that’s true,” he said. “I decided to ask God and the only response that I got was to consider the priesthood. For a year and a half, I came up with this huge list of no’s and why I shouldn’t enter the priesthood — stuff like wife, kids, freedom and whatever I could think of. But slowly that list of no’s started to fall away until I wound up with none. I had nothing else to cling onto so I took the jump.”

McFarland said all that finally led him to go talk to Father Shane, the vocations director at the time, who worked at the Newman Catholic Church on the LU campus.

“I was walking to the parking lot every day and I would pass (the church), until after almost a month I finally decided to go in,” he said. “I spoke with him, picked up the application and it sat on my coffee table for a little bit because it finally seemed so real.”

After spending a weekend at a seminary to see what it was like to live as a priest on a day-to-day basis, he said he found that he didn’t want to leave and took that as a sign.

“When I got back, I decided to finish the application,” he said. “I turned it in, went through the process and started that August in 2010. The vocation guide calls us to live for joy and fulfillment and once this whole journey began, it all started to fall into place.”

After passing the initial assessments, Father Anthony said he dropped out of Lamar and enrolled at the University of Dallas, where he stayed in the Holy Trinity Seminary and graduated after four years with a bachelor’s in philosophy and letters.

Upon graduation from UD, he took the next step into priesthood by earning a master’s in theology from St. Thomas and the St. Mary’s Seminary in Houston. He was ordained to the priesthood in the Diocese of Beaumont on June 22. Shortly after he was assigned to St. Joseph’s.

One of his favorite passages that led him through his journey is Joshua 1:9: “Have I not commanded you? Be strong and courageous. Do not be frightened, and do not be dismayed, for the Lord your God is with you wherever you go.”

St. Joseph’s Catholic Church is located at 4600 Procter St., where they offer daily Mass at 8 a.m. Tuesday through Friday, Saturday Vigil Mass at 5 p.m. and Sunday English Mass at 7:30 a.m. with a Spanish Mass following at 8:45 a.m.