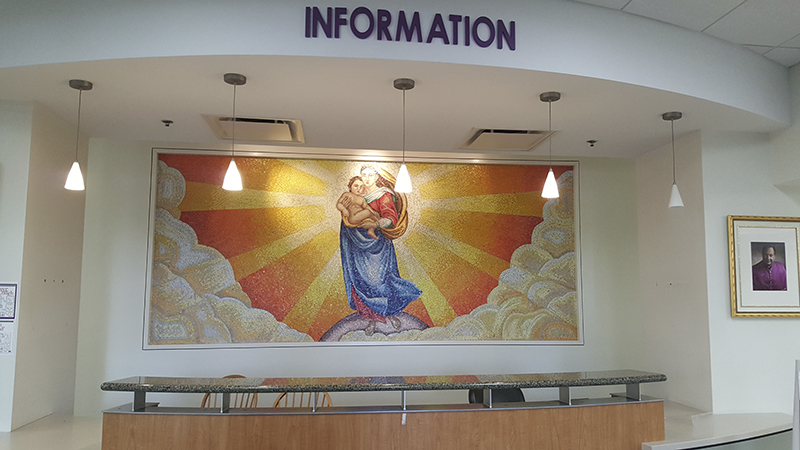 The mosaic behind an empty information desk can be seen in the lobby of the closed St. Mary Hospital on Thursday. (Mary Meaux/The News)

The doors to St. Mary Hospital officially closed on Thursday, bringing an end to 89 years of service at the Gates Boulevard location.

The bittersweet day saw patients being cared for in the emergency room while workers began the task of packing up.

“We were pleased to care for our last patients today and continued to offer them the compassionate care they expect from St. Mary Hospital right up until we accepted our last ER patient at noon,” Christus Southeast Texas Health System President Ryan Miller said.

The front entrance of the hospital appeared somewhat bare, and someone had drawn a large heart with the words “Ave Maria” in the condensation on one of the large windows.

Miller said they saw their last surgical patients and ceased their outpatient operations on Wednesday. 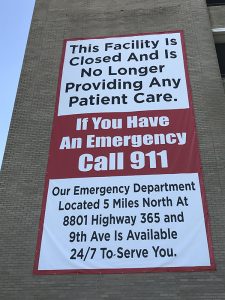 A banner posted on the outside of St. Mary Hospital on Thursday reads: “This facility is closed and no longer providing any patient care. If you have an emergency call 911. Our emergency department located 5 miles north at 8801 Highway 365 and 9th Avenue is available 24/7 to serve you.” (Ken Stickney/The News)

By late afternoon a large banner was posted on the side of the building near the entrance to the ER that said: “This facility is closed and no longer providing any patient care. If you have an emergency call 911. Our emergency department located 5 miles north at 8801 Highway 365 and 9th Avenue is available 24/7 to serve you.”

Miller said decommissioning ceremonies were held in each department with current staff on Thursday.

“We had a short prayer program and then open time for staff to share their memories and feelings,” he said. “It provided a nice sense of closure in a heart-warming environment.”

Other buildings near the hospital

Leases for physicians offices adjacent to the hospital facility will continue until Sept. 1 and current physician tenants will relocate their offices between now and then. After that, the physicians office building will be closed.

The Gates Professional Building will remain operational for the foreseeable future, he said, while all other adjacent buildings are either closed now or will be after Sept. 1.

Officials announced the closure of the 229-bed facility in early June, saying the hospital’s business model was unsustainable after years of declining numbers for the hospital in general and for inpatient care specifically. 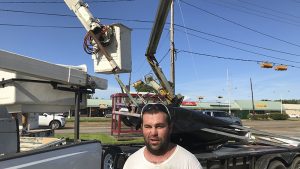 Around 120-130 full- and part-time employees and around 25 on-call workers will be affected. In an issued statement, the hospital said it would try to place those workers in the 70-75 open positions in the Christus system. Those who cannot be placed, they said, would be offered other assistance, including severance packages, according to an archive story.

The announcement was made in the hospital’s convent chapel where scripture from Ecclesiastes 3:1: “To every thing there is a season, and a time to every purpose under the heavens,” was cited. The closure is seen as the “next season with outpatient care at its Mid County facility at 365 and Ninth Avenue representing the future of healthcare delivery.”