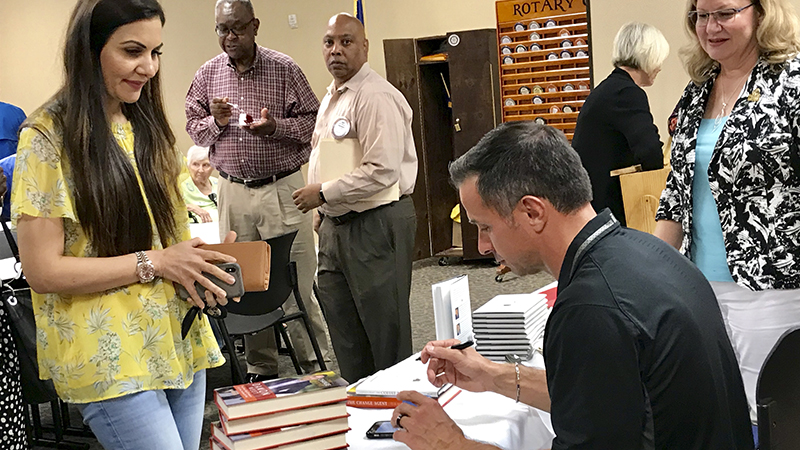 Damon West may return to state prison, this time by his own volition. It has long been in his plans.

The Port Arthur native, former North Texas quarterback and best-selling author has discussed this week with the Texas Department of Criminal Justice a speaking tour of all 104 state-operated prisons, a tour that, if approved, would take more than two years to complete.

In those visits, he said, he would spread the message of “the coffee bean,” introduced first in his autobiographical “The Change Agent” and presented in fictional form in the slender volume he has co-authored with motivational speaker Jon Gordon, “The Coffee Bean.”

The latter book, published July 2, has moved to No. 2 on The Wall Street Journal’s best-seller list, and has joined other national best-seller lists. Also this week, rights were sold to publish “The Coffee Bean” in Vietnam, West told the Port Arthur Rotary Club on Thursday, making his “coffee bean message” global.

West, 43, whose college football career ended in injury during his sophomore year, developed a drug addiction in his 20s that led to a rash of property crimes in North Dallas, where he was living a decade ago. He was sentenced in 2009 to 65 years in the state prison system — in essence, a life sentence — but gained freedom in seven years because of exemplary behavior, driven by his penchant, ignited in prison. There, an older, wiser prisoner told him the “coffee bean story,” which changed his life.

That prisoner, whom he calls “Mr. Jackson,” advised him he could improve the prison environment around him, relating the “coffee bean” message. Roughly, the analogy uses a boiling pot of water and three items: a carrot, an egg and a coffee bean, each representing a type of prisoner. Put the carrot into the water, Mr. Jackson told West, and it goes soft. Put the egg into the water, and it hardens. He didn’t want to be either type prisoner, the older man advised.

But put the coffee bean in the water, he said, and it would change the environment around him for the better. It would produce coffee, something useful and welcome.

That was the message West kept close to him while he navigated an oftentimes brutal prison system and sought, first, the respect of his fellow inmates and then his own self improvement. That story is told in “The Change Agent,” which was published by Post Hill Press in the spring.

West, raised in a loving, spiritual home by good parents, is unsparing of himself in the book, clear in expressing that the fault for his criminal past was his alone. Reclaiming his soul, with God’s help, was his responsibility.

Since his parole release nearly four years ago, West has worked as a paralegal, pursued his continued sobriety, embraced church life and became an accomplished public speaker, warning other athletes, college and high school, of the inherent danger of drugs and relating the “coffee bean” message.

He’s also married and completed a master’s in criminal justice at Lamar University, where he was a graduation speaker. He’ll teach a course on the prison system there in the fall.

Clemson football coach Dabo Swinney, impressed by West’s presentation to his team, advised Gordon to seek West out; their telephone meeting led to the co-authored book.

West has delivered his “coffee bean message” to, among others, a national meeting of the American Correctional Association, and in his first book expressed hope that he might become a useful partner to the Texas prison system.

“Imagine that,” he wrote. “TDCJ sending me back to prison to be part of the solution instead of part of the problem. Life coming full circle.”

That would be the point of his proposed prison tour, he said, which he would fund himself, including contributing a copy of both of his books to each prison library.