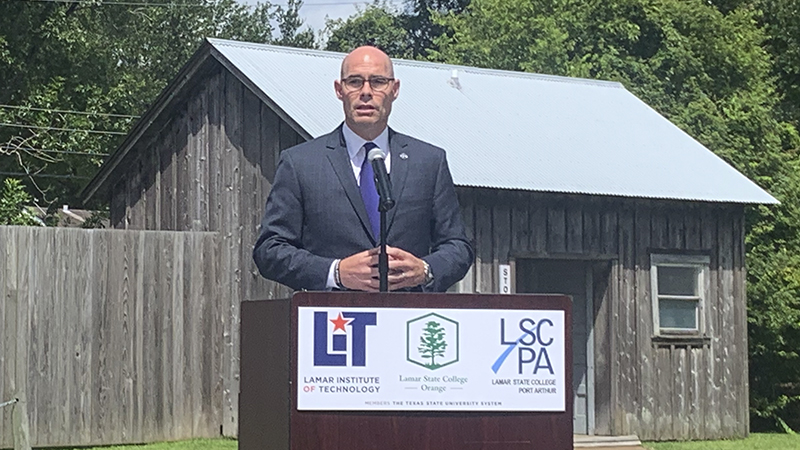 Dennis Bonnen, speaker of the Texas House of Representatives announced that a 25 percent tuition cut will be applied to Lamar Institute of Technology, Lamar State College Port Arthur and Lamar State College Orange starting in the fall during a news conference in Beaumont, Wednesday. (Cassandra Jenkins/The News)

BEAUMONT — The Lamar State Colleges —Port Arthur, Orange and the Lamar Institute of Technology — will see significant cuts in tuition and fees after the Texas State University System Board of Regents approved a $17.3 million budget for reductions.

The legislation focused on three core aspects: lowering tuition by an average of 25 percent, standardizing tuition for all three schools and reducing the cost of dual credit courses to $50.

“We all anticipate that this investment will create a ‘gusher’ for new students who will benefit from the education and benefit the state of Texas with qualified workers,” said William Scott, chairman of the TSUS Board of Regent as he stood in front of the iconic Spindletop gusher. “This is the largest cut in over 10 years. It will allow the state colleges to recruit more students and help increase the Texas workforce.”

Brian McCall, chancellor of the Texas State University System, said the changes were officially adopted Friday and is a “done deal” ready to take place for fall 2019.

“Send your students, send your friends,” he said. “Let them know that these are quality institutions. LIT and the Department of Education says it is the No. 1 in Texas of all community colleges on earnings upon completion. The Aspen Institute says that the 10-year-old Lamar State College of Port Arthur is one of the top 150 community colleges in America by various rankings for the second year in a row. Orange, with its brand new president, is on fire with phenomenal things happening.”

Speaker of the Texas House of Representatives Dennis Bonnen said he is honored to be a part of the process that has helped students in their educational journey.

“It’s an awesome opportunity, because we’re all about giving kids bright futures,” he said. “What we’re doing today is shortening the timeline for these students to finish their education, making sure that they will have less debt when that education is done and getting them closer to those great job opportunities that are throughout our region and our community.”

“I think we have a great story out here in Southeast Texas,” State Rep. Dade Phelan, R-Beaumont, said. “I think that’s why we’ve been so successful. We’re not just creating jobs — we’re creating careers. This is industrial mechanics, this is welding, this is maritime training, graphic design, this is nursing and law enforcement. These are real careers for our community and I think we told our story well. That’s why were able to get this funding.”

Phelan said the funding will be a game changer and the approval couldn’t have come at a better time. After Hurricane Harvey affected the Gulf Coast, enrollment across all three schools dropped noticeably.

“After Harvey, so many of our students work,” he said. “They are working while they are going to school. If they have to choose between sheetrock, a car or tuition, they are going to choose the former because that is what’s best for them and their families. We saw it with Ike and Rita. It took a decade for Lamar to recover after Rita. It will take a decade to recover our two-year institutions after an Ike or Harvey, so this could not have come at a better time.”

Phelan is excited for rebuilding enrollment and to see the future impact this change will make for Southeast Texas.

“Kids will now be able to graduate faster,” he said. “They will be able to take more course loads on and wrap up their college careers with less debt. That’s what we all want. This is a huge opportunity for SETX. Many of these kids are first-generation college students and they are all working. A 25 percent reduction is a huge thing for us and I couldn’t be prouder.”