Talent across the board: Port Neches 10-year-olds give coaches options 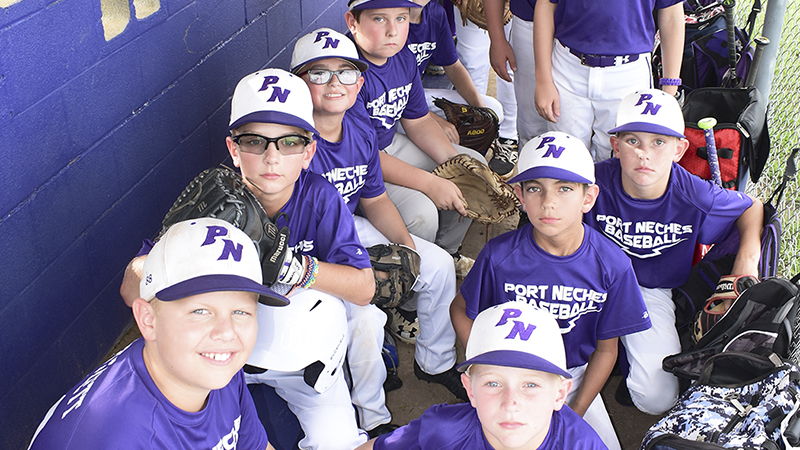 PORT NECHES — If the coaching staff of Port Neches Little League’s 10-year-old All-Star team finds it difficult to settle on a particular game lineup, it’s a problem manager Cory Felps is seemingly willing to have.

“The hardest part is to put every kid on the field to play, because you know every one of them can play any position, and just getting them out there, sometimes you don’t get them out there as much as you want to,” Felps said. “Sometimes, you feel bad because you know he’s just as good as the next team out there. Us as coaches, we try to prepare for each game and we go by what kid — you know, he may be a little quicker, he may have a little stronger arm — but they all catch good, they all hit good, throw good … just depending on what team we play and what defense we decide to put on the field.”

The talent up and down the lineup — make that, entire roster — has helped Port Neches punch its ticket to the double-elimination Texas East State Tournament in Tyler.

PN’s state run will begin at 5 p.m. Saturday against Section 4 champion Needville, with the winner taking on either Pearland or Washington County at 8 p.m. Sunday. The championship round is scheduled for Tuesday.

Port Neches earned the trip to Tyler by beating host Conroe and Beaumont West End twice in the Section 2 tournament.

“Every one of those ballclubs is a tough ballclub,” Felps said. “We had to fight hard and battle through it. We just came out ahead.”

Cory’s son Bryceten summarized it another way: “We played hard and we scored a lot of points for the whole section.”

Port Neches broke a 6-6 tie with three runs in the sixth inning (the last regulation frame in Little League) to beat West End in the final. It was Parker Mire’s favorite part about winning sectionals.

“It was really close and we were all getting excited,” said Parker, like many of his teammates a utility player. “The next inning, we scored a lot of runs. … They had the last at-bat, and then in the field, when we won it, it felt really good.”

The most fun thing about tournament baseball is simply “playing baseball,” according to Bryceten. For Allen Ross, it’s “the most runs.”

Maybe for Cory Felps, it’s choosing from a group of boys nearly equal in talent.

“Almost every kid on the team competes as good as the other one,” he said. “A couple of them stand out a little more than the others, but that’s not taking anything away from any of them. Everybody hits. We’re just a well-rounded team. You could not ask a better team to put on the field.”

This latest trip to state adds to the tradition of a Little League program that saw its 12-year-old All-Stars last year reach the Texas East final against Houston Post Oak. That same Port Neches group were Section 2 runners up as 11-year-olds, and the 2018 Port Neches 11s also won District 32.

“We’re trying to keep up with it and enjoy the ride with the kids we’re going on and try to bring home another state title for them,” Felps said.