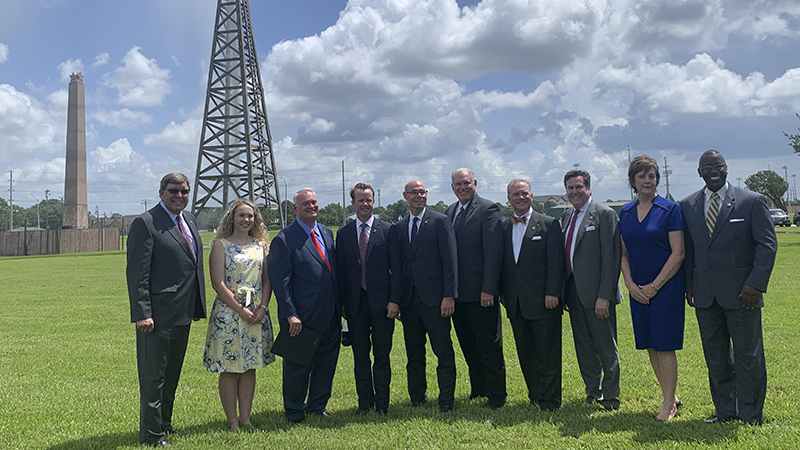 Texas State University System state officials along with Lamar State College presidents and student representative, Katey McCall, second from left, pose in front of the Spindletop Gusher after announcing the approval of legislature that will significantly reduce tuition at the two-year campuses. (Cassandra Jenkins/The News)

“Two years ago, the people of Port Arthur had their sense of security stolen from them by Hurricane Harvey,” she said. “Since then, it has been a slow, tedious struggle for them to regain a foothold on their future. The reduction of tuition and fees for students announced today is counter to the national trend of rising tuition and will give Port Arthur residents and the students of LSCPA new hope in achieving their dream of graduating from college.”

Reynard thanked those that helped impact students’ lives directly in a meaningful way.

“’Thank you’ can’t begin to fully express how grateful we are at Lamar State College Port Arthur for the efforts of Speaker (Dennis) Bonnen and Representative (Dade) Phelan,” she said. “On behalf of our students and their families we offer thanks for the help in securing the future of a generation of students as well as the future of the college.”

Reynard said she expects to see more students this fall and is preparing for that increase.

“We always have the students’ best interests at heart, that’s what we do — that’s our passion.”

Brianna Montijo, LSCPA Student Government Association president, said in an issued statement she witnessed something incredibly important that will help change her community and her education.

“Being a second-year college student whose parents make ‘too much’ money to qualify for financial aid and who works two jobs while going to school, I sometimes find paying tuition and fees to be stressful and daunting,” she said. “I am extremely grateful for the decision by the TSUS Board of Regents to lower tuition for Lamar State College Port Arthur to give even more people the opportunity to pursue a higher level of education.

“This decision helps those currently in school to be able to afford the cost of college. It also will encourage others to enroll, allowing them the chance to benefit from an associate’s degree that gives them a chance to continue on to a four-year school or into the career field of their choice.”