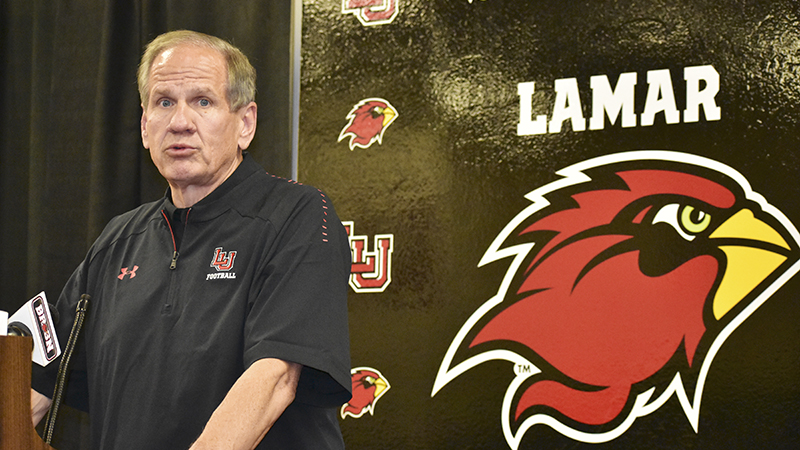 Amid the Southeastern Conference and Big 12 Media Days frenzy, the Southland Conference only takes one day each July to let players and coaches jabber about the upcoming season in front of the press corps.

Predictions for the order of finish in the Southland are expected to be released shortly before the start of Media Day. Lamar may receive a favorable prediction coming off its first appearance in the NCAA Division I playoffs following a season-changing six-game winning streak, the program’s longest since being relaunched in 2010.

Then, again, despite the return of key offensive weapons including quarterback Jordan Hoy and running back Myles Wanza, an all-new starting secondary yet to be named could factor into the predictions.

Before the Southland Media Day, let’s look at some pressing bullet points concerning Lamar football in 2019:

Hoy, a senior who transferred before last season from Old Dominion, was just what the Cardinals hoped for when now-graduated Darrel Colbert went down with an injury. All Hoy did was throw a combined 28 for 44 for 508 yards in wins against Sam Houston State (the game in which Colbert was hurt), Stephen F. Austin and Central Arkansas and run for 225 yards against SFA, earning consecutive Southland player of the week awards in the process and eventually conference newcomer of the year accolades.

Schultz has in the past favored using two quarterbacks in the same game, and Colbert certainly shared time with Andrew Allen in 2017 and Hoy last year. Incoming SEC transfers Will McBride (Tennessee) and Shane Johnson (Texas A&M) may have a chance at making it a two-quarterback system with Hoy.

Edmondson, a Texas A&M graduate, was hired as co-offensive coordinator following the retirement of Dan Dodd and shares the role with offensive line coach Bill Bleil. He was coaching in the high school ranks following a long stint on the staff at Rice, helping the Owls win two of three bowl appearances. Expect Schultz and Hoy to comment on what kind of fit Edmondson is (or will be) for the Cards’ offense, which also brings back a powerful backfield in junior tailback Myles Wanza (110 carries, 704 yards, three touchdowns) and senior fullback A.J. Walker (146 carries, 645 yards, two touchdowns). Hoy (81 carries, 577 yards, six TDs) is a proven rusher as well, but the Cards will also miss the run-and-pass impact Colbert made.

The Cardinals, who finished 7-5 and lost to Northern Iowa 16-13 in the first round of the NCAA playoffs, are starting over in the secondary as their entire starting lineup (at least from the Northern Iowa game) either completed eligibility or left the team for unknown reasons.

Cornerback Rodney Randle and safety Davon Jernigan were the most successful of the secondary group. Randle is hoping to make the Los Angeles Rams’ 53-man roster, while Jernigan earned a contract with the Canadian Football League’s Saskatchewan Roughriders after achieving consensus All-America status with the Cardinals. Nickelback Garrison Mitchell, free safety Lane Taylor and cornerback Tyler Rios all have finished eligibility, while junior cornerback Caleb Abrom, who split some starts with Rios, has left the team. Abrom was the hero in Lamar’s dramatic 27-21 win over Incarnate Word that started the six-game win streak, returning a blocked kick for the winning score as time expired.