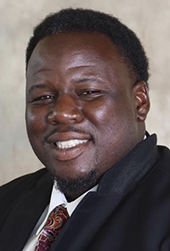 Few football coaches get to lead programs where they were once players. Edward Taylor was one of the few.

“He was one of the finest players and coaches we had at Ozen,” said Arthur Louis, Beaumont United’s head coach who mentored Taylor when Ozen opened in the summer of 1997.

Taylor got to be Ozen’s head coach for two seasons before the school merged with Tropical Storm Harvey-damaged Central to form United on Ozen’s campus last year. One of Louis’ first Panthers then became one of his first assistants with the Timberwolves.

“He earned the title of assistant head coach at Beaumont United,” Louis said.

Taylor, a 2000 Ozen graduate, died unexpectedly Sunday morning, Louis confirmed to The News. He was 37.

“He is so very missed by so many people, especially in the coaching community.” Louis said. “He’s not with us.”

The cause of death was not immediately released. “I would be speculating,” Louis said, asked if he knew of the cause.

Port Neches-Groves head coach Brandon Faircloth said the first thing that came to mind about Taylor was how good a coach he was.

“He was a mentor,” Faircloth said. “He was loved by coaches he coached against. This is a tough loss not just for Beaumont United but for Southeast Texas.”

Taylor received his bachelor’s degree from Lamar and master’s degree from Prairie View A&M. He was Central’s offensive coordinator and assistant track and field coach when he was appointed to succeed David Suggs at Ozen in 2016.

The news of Taylor’s passing came hours after four West Brook players were involved in a Saturday vehicle accident in Jefferson County. All four have been hospitalized at a Beaumont hospital, but their conditions as of Monday afternoon have not been confirmed.

West Brook and United, the two active high schools in the Beaumont ISD, compete in District 21-6A. Ozen and Central were members of the former District 22-5A, which included Memorial, Nederland and PNG through the 2017 season.

A memorial for Taylor is scheduled for 6:30 p.m. Wednesday at Beaumont United’s James F. Jackson Center for the Performing Arts, 3443 Fannett Road.

“I just think of the lives he touched in Beaumont and Southeast Texas,” Faircloth said. “I’m just praying for his family and his team. He helped players succeed not just on the football field but off the field as well.”