BRIGHT FUTURES — Sky’s the limit: Lamar State athlete was perfect in the classroom 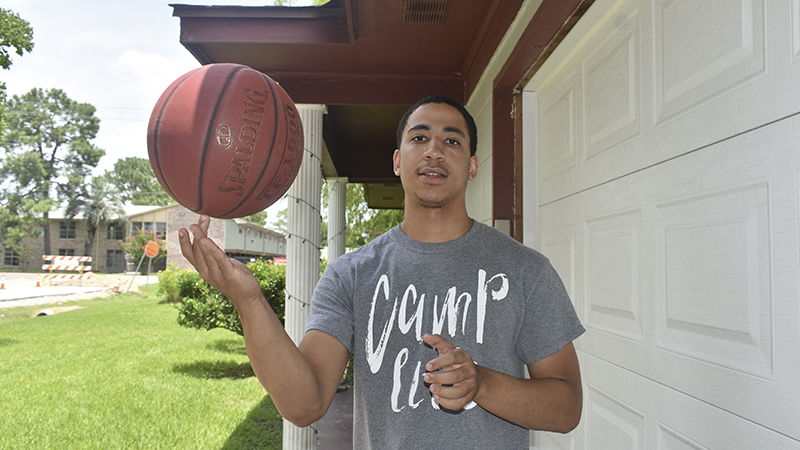 Tevin Baker graduated with a 4.0 GPA from Lamar State College Port Arthur in the spring while also playing basketball for the Seahawks. (Stephen Hemelt/The News)

If floodwater couldn’t stop him, calculus never stood a chance.

It shouldn’t present too difficult a challenge; Baker graduated in the spring from Lamar State College Port Arthur with a perfect 4.0 GPA in business administration, earning top-of-class distinction.

Now, he’s taking his associate’s degree on the road, with a goal to add more academic hardware in the field of sports administration. Baker fancies himself a future high-powered sports agent. 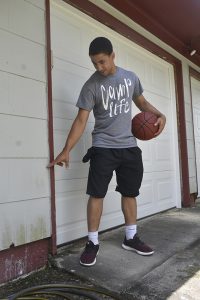 Tevin Baker points out how high the floodwaters from Hurricane Harvey reached at his home. (Stephen Hemelt/The News)

Challenges are nothing new for Baker, who stands at 5-10, 175 pounds, yet excels on the basketball court.

He played in 61 games during his two years at LSCPA, earning 19 starts as a sophomore. His best game came against NJCAA Region 14 Jacksonville when he scored 19 points while connecting on 7 of 9 field goals.

His basketball career was almost dead on arrival when Hurricane Harvey flooded him out of his home two years ago.

Baker was trapped with his mother, Kathy, tweeting throughout the night for help.

At its worst, water filled their home at a rate of six inches an hour.

He and his mother ended up in a shelter, saved in the morning by rescue workers on boats.

When things calmed down, academics returned to Baker’s mind.

“I was concerned about my books, which were in the house and might have been damaged,” Baker said. “I called (head) coach (Lance) Madison to ask him what to do, because I didn’t have funds to get more books. He said, ‘Don’t worry about it; we’ll figure it out when you get to a safe place.’”

The safe place turned out to be campus, as Kathy impressed upon her son to move into the dorms, focus on school and leave the home recovery to her.

“That is what really made me focus on the basketball and academics, because I was away from home and the distractions,” Baker said. “We were back home in eight months.” 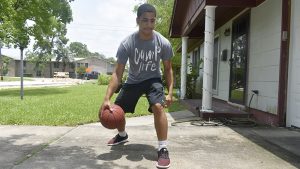 Tevin Baker demonstrates some of his basketball moves as he looks forward to attending East Texas Baptist University in the fall. (Stephen Hemelt/The News)

Baker followed through on his mother’s foresight, acing all of his classes, including challenges from British Literature, Calculus for Business and Principles of Microeconomics.

At 20 years old, Baker is the first person in his family with a college degree.

One person who firmly believes in him is Mavis Triebel, Baker’s college U.S. and Texas Government instructor.

“He was one of the most diligent scholars I ever taught,” Triebel said. “Invariably, if he didn’t understand something, he would stay after class and we would discuss what he needed to know. He was the kind of student who wanted knowledge and wanted to do well. He was very concerned about everything he did, and I enjoyed helping him.”

“He wanted information and would ask questions, look me in the eye, get the answers and write it out,” she said.

Baker added it’s his mom who always pushes him to make straight A’s while trying his best at everything.

“To me, the sky is the limit,” Baker said. “I take that into consideration every time I get up and don’t want to go to class. I just think about my family members who didn’t get the chance that I got to go to class everyday.”